Are Millennials Really the Generation That Bikes?

Much has been written about millennials and their travel choices, both in the popular press and academic journals. The common theme of the storyline in the popular press is that millennials are driving less, owning fewer cars, and/or not getting their driver’s license. As a complement to that, they are early adopters of new modes, such as car sharing, bike sharing, and ridehailing. One assertion is that they would rather be using their mobile device in a Lyft car or on transit, than sitting behind the wheel. While the popular press often attributes these shifts to fundamental changes in attitudes or values, research from academics such as Noreen McDonald tells a more complicated story. McDonald found that economics, both decreased employment and the overall dampening in travel demand, explain much of the decrease in millennials’ driving. Switching modes did not, though attitudes and electronic substitution may account for 35-50% of the change. Researchers at UCLA came to a similar conclusion.  And University of Michigan researchers noted that reduced licensing rates appear across generations. And, of course, the question remains as to what will happen as these millennials age. There is already evidence that some of the trends are shifting as the economy has improved.

Within this discussion, there been thread that millennials are also bicycling more (along with vehicle sharing, transit, and walking). A quick web search reveals numerous headlines (e.g. Millennials Go By Bike), my favorite of which states that “millennials and bicycles go together like fixies…and messenger bags.” The stories sometimes cite a report using NHTS data from 2001 and 2009 showing an increase in the number of bike trips made by 16-34 year-olds. So, when Noreen invited me to be on a panel at the TRB Annual Meeting to talk about millennials and bicycling, I quickly said yes. I had recently conducted a national survey of adults in the 50 largest urban areas in the US, in cooperation with the National Association of Realtors®, that asked questions about everyday travel, including bicycling. The initial results of that survey fit much of the common narrative about millennials using transit more than other generations and preferring to live in more urban, walkable neighborhoods. But, bicycling did not stand out in our generational comparisons. To prepare the TRB talk, I dug into the data further, and here’s what I found.

Overall, millennials do not bike more than GenXers. Of the adults we surveyed that were physically able and knew how to ride a bike, 74% of millennials had not ridden in the past 30 days, essentially the same as for GenXers (72%, Figure 1). Of those who did ride, Millennials rode an average of 6.3 days and GenXers rode an average of 7.8 days, a non-significant difference. Both generations are riding more than older generations. Only two percent of both generations regularly commuted to work by bike, while millennials were more likely to commute on foot or transit.

But, they may be biking for different purposes. GenXers were more likely than Millennials to only have ridden for exercise (e.g. mountain biking, or a loop ride along a path). While only 13% of Millennials rode only for exercise, 18% of GenXers did. That leaves 13% of Millennials that rode for both transportation and exercise, compared to 10% of GenXers. These differences do not appear to be related to differences in how much time is spent on leisure activities; millennials, on average, actually spend more time on “leisure and sports” according to the American Time Use Survey.  But, it may reflect differences in how they spend their leisure time. 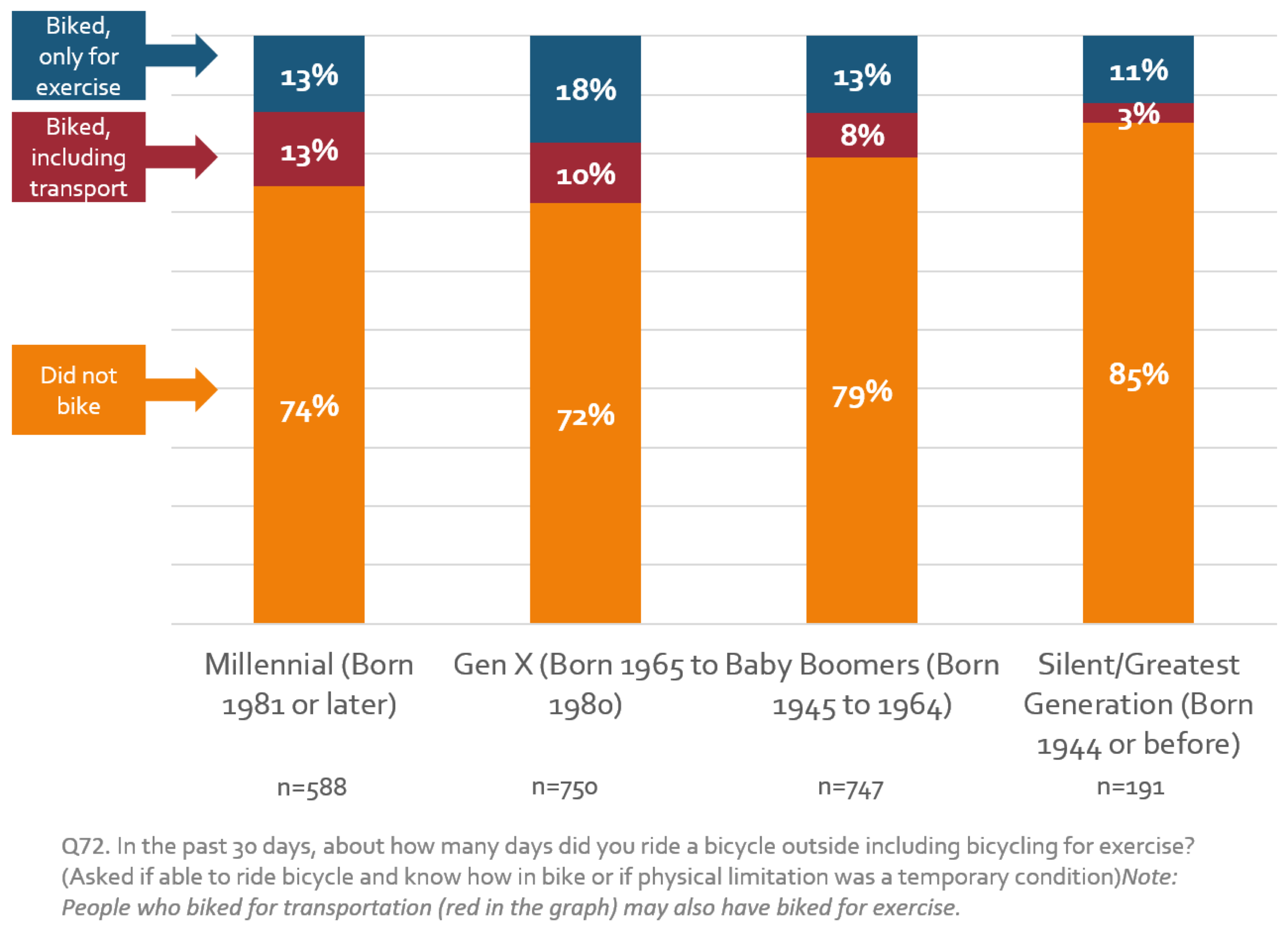 Figure 1 Biking in the past 30 days, by generation 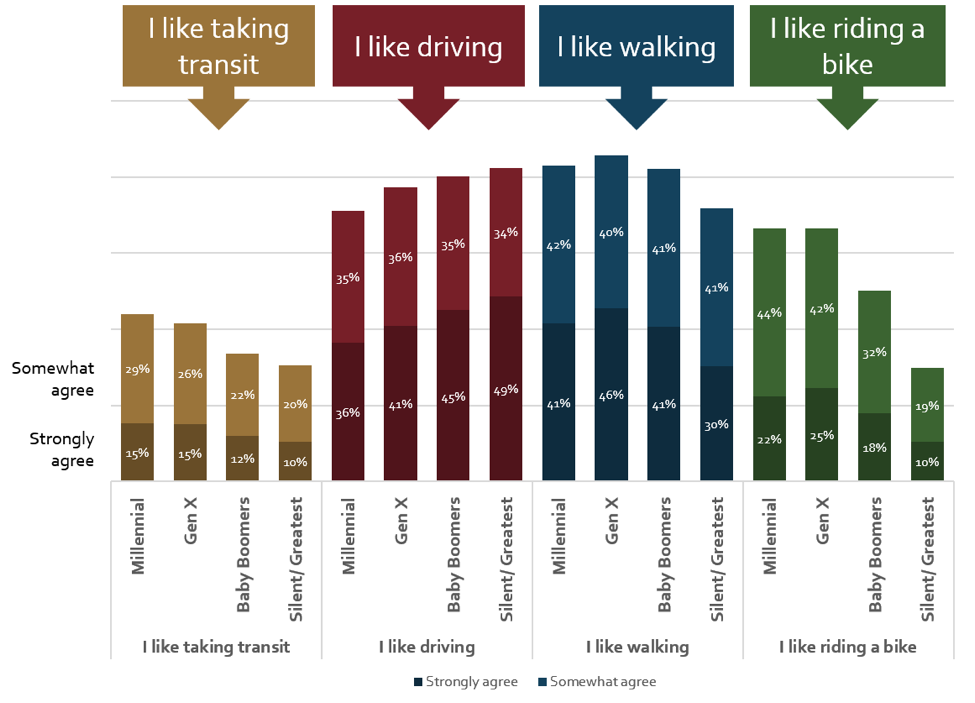 These attitudes and behavior carry over into housing preferences. Only 24% of Millennials stated that having bike lanes and paths nearby was very important in deciding where to live (Figure 3). Twice as many (50%) stated that being within an easy walk of other places and things in the community was very important. Having bike lanes nearby was slightly more important to GenXers. 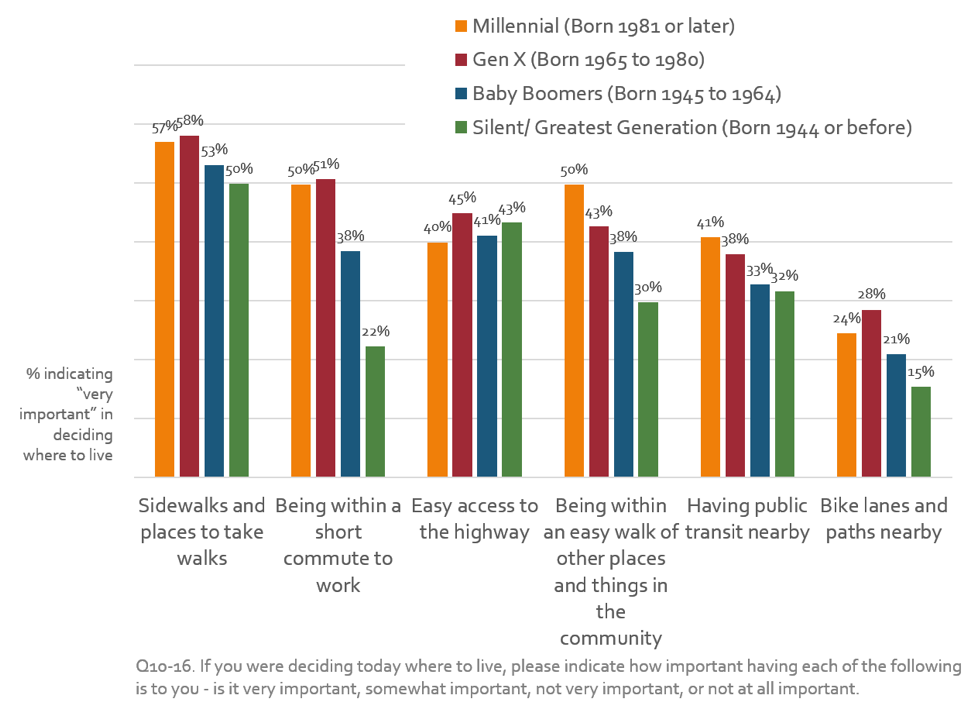 Figure 3 Importance of transportation options in choosing a new home, by generation

The weak preference for having bike lanes nearby doesn’t mean that they are willing to ride without them. When asked how comfortable they would feel biking in different places, only 10% of Millennials felt very comfortable biking on a busy street without a bike lane; that share only went up to 13% if a striped bike lane was added (Figure 4). It nearly tripled to 36% if the bike lane was separated from traffic by a curb, planters, or parked cars (aka a separated or protected bike lane). So, the image of a Millennial on a fixie bike zipping confidently in and out of traffic in the city is far from the norm. 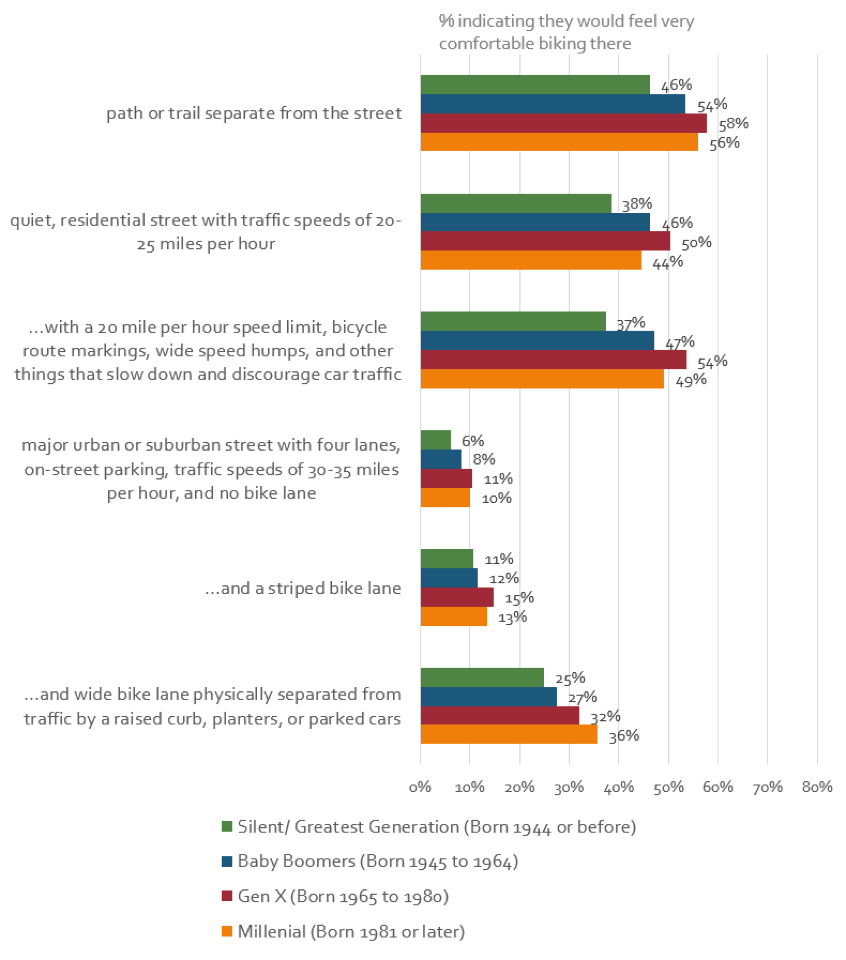 And these preferences are important to note, because Millennials want to bike more. One-quarter of the Millennials surveyed strongly agreed that they wanted to travel by bike more – the highest of any generation – and another 28% agreed somewhat with that statement.

What’s stopping them? Millennials’ reasons for not bicycling more were similar to GenXers, including needing a vehicle for work/school/other reasons (51% of Millennials and 56% of GenX) and places being too far to bike (49% of Millennials and 48% of GenX). The one difference between the two generations was that 50% of Millennials stated that they did not have a bike to ride, compared to 44% of GenXers. This lack of a bike is obviously entangled with the desire to bike. But it likely also reflects lower incomes and differing living situations. While a bicycle may not seem expensive to many, with student loan debt, rising rents, less stable income sources, and small apartments, purchasing and storing one may not be a reasonable option for many Millennials, particularly if it’s not a good transportation option. Moreover, Millennials are less likely than older generations to have ridden a bicycle to school. Therefore, they may be less likely to still own a bike from that time of their lives. Perhaps more importantly, if they did not ride a bike regularly in middle-school or high school, they have not established a habit of riding that could carry into early adult life.

The lack of bicycle infrastructure is also a barrier, as it is for all ages. Not having enough bike lanes or trails and not feeling safe because of traffic was a barrier for 40% and 39% of Millennials, respectively, about the same as GenXers.

There is one key difference with Millennials – women. Unlike every other generation, similar shares of male and female Millennials bicycle (Figure 5). There is no gender gap. If this holds true as the generation ages, it is one reason to be optimistic about increasing overall levels of bicycling in the future.

What about the future? With a few exceptions, Millennials are not that much different from older generations when it comes to bicycling. Cities cannot expect large increases in rates of bicycling simply due to generational changes. Providing infrastructure and supportive policies and programs that make people feel safe and comfortable riding will be key, for all generations.

Click here for the slides from my presentation at the Transportation Research Board's 2017 annual meeting.