The sharing economy is getting a lot of attention these days, both good and bad, from policymakers to Portlandia. We’ve been studying one type of sharing—peer-to-peer (P2P) carsharing. Carsharing allows individuals who want access to a car to rent one rather than having to deal with the cost, hassle or commitment of ownership.  Traditional carsharing companies, such as Zipcar, provide a fleet of vehicles located near residential or employment concentrations that members can rent. P2P carsharing is similar, but involves one private citizen renting a car from another, usually facilitated by a company that manages reservations and payment and provides additional insurance.

Our research has two main objectives. First, we’re looking at whether P2P carsharing will reduce vehicle miles travelled (VMT) and car ownership. Research on traditional carsharing shows that it can reduce driving by affecting the behavior of the renter, by making costs more explicit and by reducing ownership. With P2P carsharing, we’re also looking at the car owners’ behavior. The hypothesis is that owners might leave their car at home more often so that it is available for rental, thus earning more income. The second objective is to see whether P2P carsharing expands mobility options in economically and socially diverse areas. This might happen because traditional commercial carsharing companies typically locate vehicles in economically strong, relatively dense areas, whereas P2P vehicles could be anywhere people own cars they are willing to share. And, vehicles may also be more affordably priced.

Our three-year research project, funded by the Federal Highway Administration, is nearing the end of the data collection phase. We recruited 334 car owners and 465 car renters to participate in the study. They all live in the city of Portland and are participating in Getaround’s P2P carsharing service. We’re collecting pre, interim, and post surveys, as well as using GPS data from the vehicles to measure changes in VMT. We’re still processing the millions of GPS data points, and finishing up surveys from several participants, but we do have some early findings to share.

As with any research based on a sample, the findings are limited by any biases in our methods. The P2P owners and renters in our study may not accurately reflect all P2P renters and owners, though we did our best to recruit a high share of people who signed up for the service. Perhaps more importantly, the people participating in P2P now should be considered “early adopters” who may differ from people opting in when the service is more established.

Who shares their car with strangers?

Compared to the Portland population, the sample of P2P car owners in our study were much younger and more highly educated than Portland residents (Figure 1), which is consistent with other studies of the sharing economy. Perhaps surprisingly, 58% of the car owners in our study only have one car in their household – the one they are allowing people to rent. This reflects their multi-modal nature; only 47% regularly drive alone to work, while 18% biked, 13% took transit, and 10% walked. 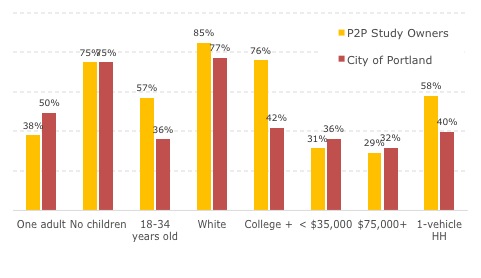 We won’t be able to fully answer this question until we finish crunching the data next year. But, in the initial survey of vehicle owners, we asked them what they thought they would do. Over half (56%) did anticipate that their behavior would change, including using other modes and driving at different times and days (Table 1)

We examined the Census block groups containing one or more P2P vehicles (Getaround), vehicles from a traditional station-based carsharing company (Zipcar), and a company offering one-way pay-per-minute vehicles with no set vehicle locations (Car2Go). At the time (summer 2013), these were the primary carsharing services in Portland. As seen in Table 1, the P2P vehicles appear to serve a greater number of block groups and a more diverse population than station-based carsharing.  For example, we estimate that 37% of the families in poverty live in a block group that has at least one P2P vehicle available to rent. This compares to only 13% of the families in poverty living in a block group with a traditional, station-based carsharing vehicle available. Although even more block groups are in Car2Go’s service area, there is no guarantee that a vehicle is available for rent in that area. In addition, there are parts of the city of Portland, particularly east of I-205 where there are concentrations of poverty, where P2P vehicles are the only carshare vehicles available. This initial analysis, however, oversimplifies things some. Most P2P vehicles are not available to rent 24-hours a day, as are those from Zipcar or Car2Go. P2P vehicle owners choose which hours their vehicles are available. Therefore, vehicle availability is not identical.

Who rents cars through P2P carsharing?

Our study includes 465 people who signed up to rent vehicles through the P2P service and live in the city of Portland. Consistent with research on traditional carsharing, renters in our study tend to be young and highly educated. In addition, over sixty percent of renters were women, while only 51% of the Portland population is female. Figure 2 shows the demographics of the renters who completed our initial survey compared with the City of Portland (ACS 2009-2011 estimates). Study participants were much more likely than the general population to live in a two-adult household (72% versus 51%), to be under the age of 35 (65% versus 36%), and possess a four-year college degree or higher (69% versus 26%). 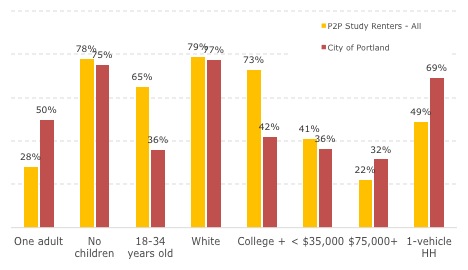 Because most of the participants do not have a motor vehicle in the household, it is not surprising that they are not dependent on a personal motor vehicle. Over one-third (36%) have a transit pass and 56% are members of another carsharing service. Nearly one-quarter regularly commute by bicycle, and 19% use transit. Only 16% primarily drive to work.

What we’ve presented here is just a sample of our observations from the initial surveys study participants completed. We have more early findings about renters in a paper that will be presented at the Annual Meeting of the Transportation Research Board in January 2015. Our main question of how P2P carsharing may affect VMT will take more time to answer. We’ll be looking at owner and renter behavior over 12-18 months to answer that. Stay tuned for those results later in 2015.