Summary: Although the running of red lights is perceived by motorists as a commonplace behavior for cyclists, little research has been done on the actual rates of cyclist compliance at signalized intersections. Furthermore, little is known about the factors that influence cyclist non-compliance. This research seeks to illuminate the rates of and reasons for infringement against red lights using video footage and survey data from cyclists in Oregon.

Bio: Sam became interested in transportation and planning while studying abroad in Freiburg im Breisgau, Germany. After benefiting from the efficient transit service and excellent walkability there, he came back to the states with a gusto for safe, efficient, and environmentally sustainable transportation. After finally figuring out what to do with his Civil Engineering degree, he enrolled in Portland State. Sam's research interests include cyclist behavior and the comprehension and safety implications of new infrastructure. Originally hailing from Kansas, he has grown weary of Wizard of Oz jokes but is otherwise happy to call Portland his home, especially with the abundance of good coffee, micro brews, and stellar pie that PDX has to offer.

The LCN+ Project Management team are responsible for improving conditions for cycling on a 900-kilometre network of London’s key commuter roads, in line with the Mayor of London’s Cycling Action Plan.

With the initial target of achieving a 200% increase in the number of cyclists in London already surpassed, the project aims to build on this by continuing to advise the 33 London boroughs on how to improve cycling infrastructure on their roads. By effectively liasing with major stakeholders such as local cycling groups, Borough Cycling Officers and Transport for London, the project can ensure that all will have agreed on the solutions reached.

Steve Cardno: Steve is the Project Manager for the London Cycle Network Plus (LCN+) project, with responsibility for the overall project management of this London wide cycling project. The LCN+ project aims to deliver 900km of high quality strategic cycle routes across London by the end of 2009/10. The project is funded by Transport for London (TfL), project managed by Camden Consultancy Services and delivered in partnership with TfL, CCS, the 33 London Boroughs and...

Do perceptions match reality when riding in a green lane?

This week I’m at the International Travel Survey Conference in Australia. The conference happens every three years, attracting over 100 geeky people who spend time thinking about things like stated preference experiments, smartphone data collection, combining sampling frames, and respondent burden. I presented some work from our five city Green Lanes project, comparing our survey data with “objective” measures, such as videos and traffic counts. The focus was on intersections, where the protected lane is no longer separated from motor vehicles. An example of one design used in Portland, OR is shown in the adjacent figure. 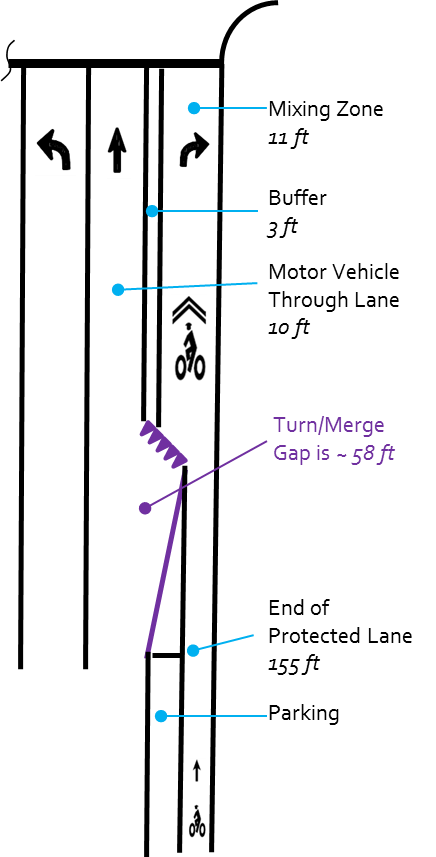 Some of the comparisons are...

Abstract: Traffic counts are an important piece of information used by transportation planners; however, while count programs are common for motor vehicles most efforts at counting non-motorized traffic – cyclists and pedestrians – are minimal. Long-term, continuous counts of non-motorized traffic can be used to estimate month of year and day of week adjustment factors that can be used to scale short-duration counts to estimates of annual average daily traffic. Here we present results from continuous counts of non-motorized traffic at 6 locations on off-street trails in Minneapolis, MN using two types of automated counters (active infrared and inductive loop detectors). We found that traffic volumes varied significantly by location, but the month of year and day of week patterns were mostly consistent across locations and mode (i.e., cycling, walking, or mixed mode). We give examples of how this information could be used to extrapolate short-duration counts to estimates of annual average daily traffic as well as Bicycle Miles Traveled (BMT) and Pedestrian Miles Traveled (PMT) for defined lengths of off-street trails. More research is needed to determine if non-motorized traffic patterns (and subsequently our adjustment factors) for...

If American cities are to serve the mainstream population of traffic-intolerant bicyclists, we need a broad range of low-stress facility types that can be applied depending on traffic and space constraints. This seminar will focus on two kinds of bicycle accommodations. A “Bicycle Priority Lane” is a shared lane treatment, like the shared lane arrow or “sharrow” that is becoming popular, intended for streets lacking the space to provide a dedicated bike lane. It enhances the sharrow by providing longitudinal markings that define a “lane within a lane,” drawing from “advisory lanes” (UK) and “suggestion lanes” (NL). We show how defining the bicyclist’s space objectively with road marking frees bicyclists from the stress of negotiating for operating space with motorists.

Separated paths or cycle tracks are bike paths along a road that are physically separated from moving traffic by a curb, median, or parking lane. For decades, they have been the mainstay of bicycle networks in the Netherlands and in Montreal, but have been shunned by US planners due to misplaced safety concerns. We will expose the flaws of the studies used to discredit separated paths, and discuss their safety record in the Netherlands and in Montreal. Practical issues in cycle track design will be discussed based on Montreal’s experience of the last two decades.

Abstract: Portland is planning to launch a bike share system. Bike share is a new form of public transit that is rapidly spreading through the United States. In 2009, bike share operated in two U.S. cities. Today, 20 US cities operate systems with another 15 in the planning stages. In several cities, including Denver, Minneapolis and Washington, DC bike share has demonstrated the ability to bring new people to bicycling while reducing single occupancy vehicle trips. How will bike share work in the nation’s most bike friendly city (doesn’t everybody already have a bike)? What challenges does Portland face, and what opportunities does bike share offer to reach the Portland’s Bike Plan for 2030’s ambitious goals?

Speaker Bio: Steve Hoyt-McBeth is a project manager in the Portland Bureau of Transportation’s Active Transportation Division. He has worked on bike share at PBOT since 2008. Steve also manages PBOT’s employer and commuter Transportation Demand Management program, SmartTrips Business. He has 15 years experience working with local governments and neighborhoods in Oregon and California on land use, energy and transportation issues. Steve is a graduate of the University of Oregon.

Portland is good, but Copenhagen and Amsterdam are awesome: Lessons Learned from the world's best large cycling cities

The founders and board members of IBPI talk about lessons learned from the world's best large cycling cities.