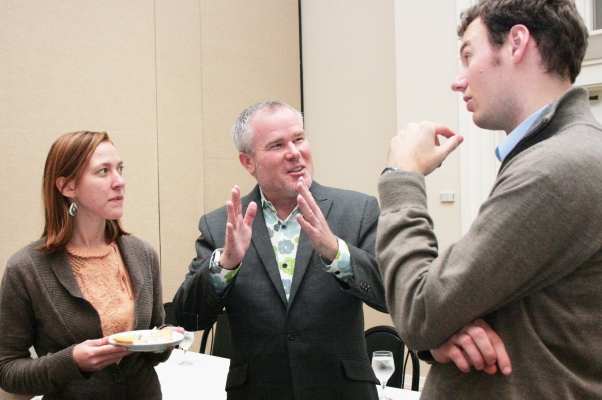 Dan Marriott, a historic road preservation planner, believes that Oregon should be proud of its heritage of excellent historic and scenic routes crisscrossing the state.

Marriott presented this message, plus a broad overview of historic road preservation, during his lecture “Historic Roads: Inspiration and Conservation in the 21st Century” at the Downtown Athletic Club in Eugene on November 10th. His lecture highlighted his years of expertise as a planner and preservationist. Marriott is the founder of Paul Daniel Marriott + Associates, a planning office that specializes in analysis and preservation strategies for historic and scenic roads.

Marriott pointed specifically to the beauty of the Columbia River Highway, built from 1913 to 1922. The highway was called “America’s greatest scenic road” when it was built and attracted pleasure drivers from far away as New York. He praised the State of Oregon’s commitment to preserve the roadway and facilities along the route, acknowledging its past while understanding its present value.

Marriott also presented examples of other historic roads from around the United States. The lecture audience was led down such famous roads as Route 66, stretching from Chicago to Los Angeles, and the Colonial Parkway, connecting the colonial-era communities of Jamestown, Williamsburg, and Yorktown, Va. In each of these roads, as well as the others he presented, Marriott showed that preservation does not have to come at...