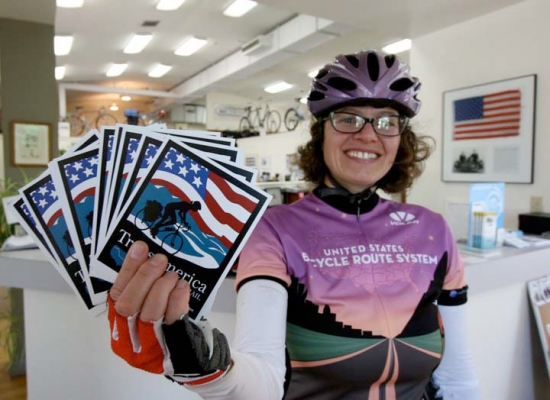 Heidi Beierle, a community and regional planning master’s student at the University of Oregon, shared stories Dec. 11 from her solo cross-country bicycle ride. Beierle presented “Take Me to Cooky’s: Riding Solo from Eugene to D.C.” at Eugene’s downtown Public Library.

During the summer of 2010, Beierle rode her bicycle from Eugene to the Preserving the Historic Road conference in Washington, D.C. At the conference, Beierle presented preliminary findings of her research on the connections among historic roadways, bicycle tourism and rural economic development.

Beierle rode solo approximately 3,500 miles in 80 days with all her gear in two front panniers.  She delivered window decals to b

usinesses along the TransAmerica Bicycle Trail and interviewed 100 people about bicycle touring and rural living.  Beierle focused on adventure and the unexpected, including sleeping among sprinklers in Prineville, Ore., raptor and mosquito attack in Wisdom, Mont., quirky bike-friendliness in Guffey, Colo., and intense heat with dog attack made better by doing a tractor wheelie in western Missouri.

She began her presentation with a picture of some peculiar looking cows. “I rode past these cows and...