In active transportation research, plenty of attention has been given to how different types of bike infrastructure affect people's likelihood of biking. Research has demonstrated that protected bike lanes encourage more people to bike than simple painted lanes, and that most cyclists feel safer riding through a protected intersection as opposed to navigating shared space with cars. However, relatively few empirical studies have investigated how holistically connected an entire bike network is, and how different populations can be positively or negatively impacted in their decision to bike by that level of connectivity.

Wei Shi, a recent Portland State University graduate with a PhD in urban planning, wrote her doctoral thesis on "The Impacts of the Bicycle Network on Bicycling Activity: a Longitudinal Multi-City Approach." In her work she found that a well-connected bicycle network - not individual bike lane segments or intersections, but the overall connection between places - is a big factor in people’s decision to bike. This is especially true for disadvantaged populations, including females and low income families.

The below image is a conceptual framework of how the changes to a bicycle network – such as morphology, connectivity, stress and comfort, and access to destinations – can affect bicycling activities on both the regional level and the route level. 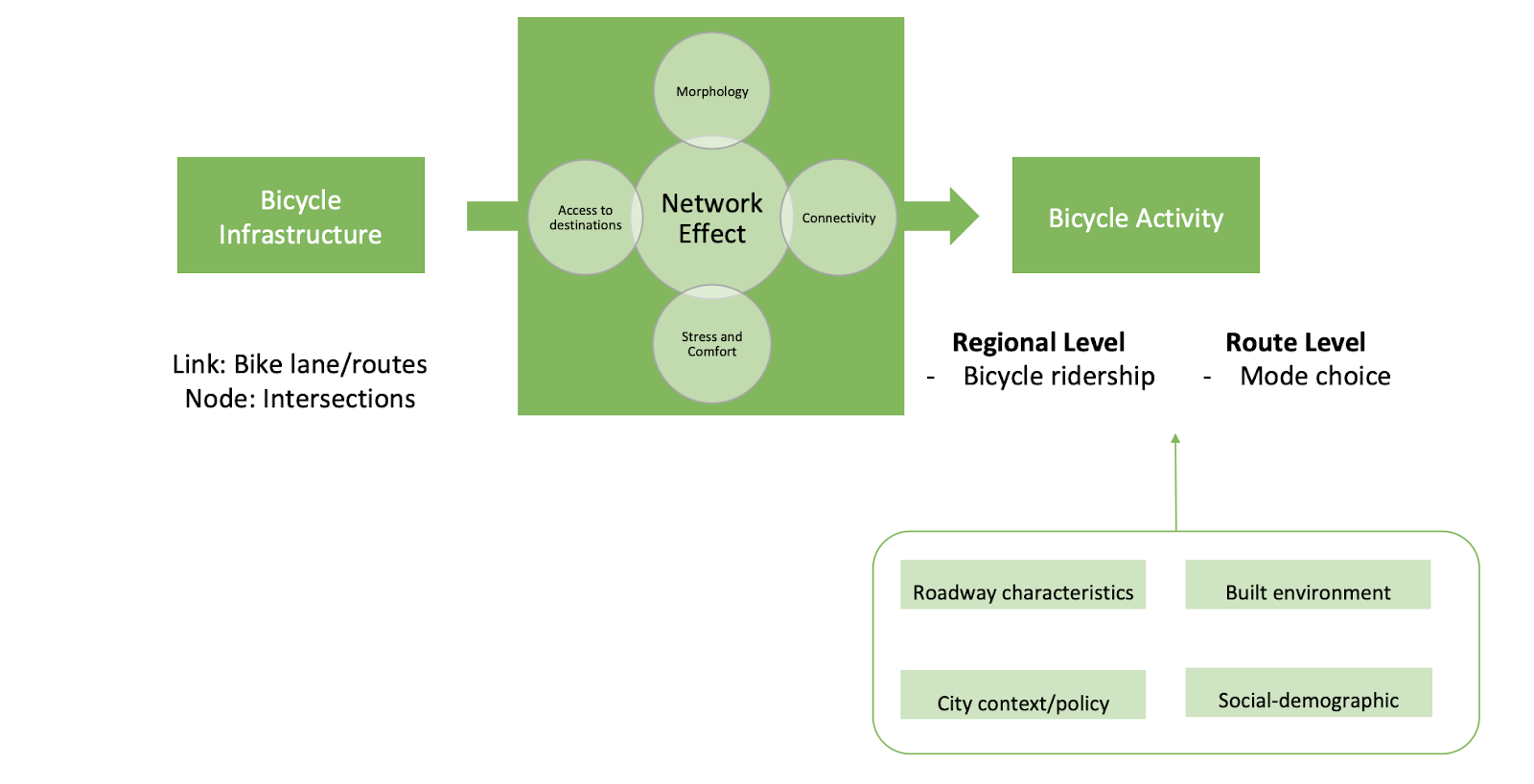 HOW DID THE RESEARCH DETERMINE THIS?

Theoretically, a complete bicycle network is more than the sum of its parts. Its total impact on cycling is expected to be greater than the combined impacts of each segment. Working with her PSU faculty advisor, Jenny Liu, Shi started by identifying metrics to measure the connectivity of a network. Her dissertation includes a comprehensive literature review considering all the ways researchers have proposed to measure bicycle networks. For her study, Shi ultimately chose a method developed by Peter Furth of Northeastern University. Furth's model for measuring the connectivity of low-stress bicycle networks offers a classification of different types of street connections by their stress level, from 1 (suitable for children) to 4 (only 2-3% of cyclists willing to ride). In the final report, pages 25–31 and 47–53 illustrate the detailed bicycle network metrics Shi designed for the study.

Next, Shi used publicly available OpenStreetMap (OSM) data to measure the bicycle networks in two cities – Portland and Minneapolis. Why those cities? There was plentiful and relatively high quality bike count data available for both. The completeness of OSM data has been increasing each year, and future researchers can benefit from the successful demonstration of this methodology.

For both cities, Shi used bike count data to measure cycling activity, and open-source data plus additional supplementary data to measure three major types of bicycle infrastructure: on-street bike lanes, bike boulevards, and off-street paths. Using Furth's criteria she measured distance, stress along the route, and in general how easy it was to travel from one point to another along the bike network. Once she had evaluated a network for its connectivity and ease of use, she looked at the bike count data to see that network's impact on, and relationship to, bike ridership.

FINDINGS FROM PORTLAND AND MINNEAPOLIS

Both cities showed an improvement in level of traffic stress (LTS) between 2011 and 2017. In Portland, the major changes occurred in the far east Portland, northeast, and southern downtown areas of the city. These were the areas with significant infrastructure investments during the six years. These included the opening of the car-free Tilikum Crossing bridge, and bike boulevard construction in the southeast areas. The percentage of high-stress street segments decreased from 45% to 43%.

The City of Minneapolis also invested in new bicycle infrastructure during the past decade. The major changes happened in the downtown area. For example, protected bike lanes were constructed along two river-crossing roads: Central Avenue and 10th Avenue SE, around the University of Minnesota. In addition, bike lanes were installed across the city on arterials and major streets such as Central Avenue North and Lyndale Avenue North. The percentage of high-stress street segments decreased from 18.4% to 15.9% between 2011 and 2017.

The study found that the low stress bicycle network was associated with high bicycle ridership and high probability of choosing bikes among other travel modes, after controlling for other variables. In particular, the low-stress catchment area significantly affected bike counts in both case cities, indicating the importance of the extensiveness of the bicycle network in promoting bicycling activity. Increasing the reachable area via a low-stress-only network from a bike counter location by 1 square mile was associated with a 10% increase in bicycle volume in Portland, and a 14% increase in Minneapolis.

THE CONNECTION BETWEEN SOCIAL EQUITY AND BICYCLE NETWORKS

To determine if a well-connected bicycle network would especially benefit disadvantaged populations, Shi used one year of travel survey data in Portland from the Oregon Household Activity Survey (OHAS). She separated the data by gender, and found that the bicycle network influenced the female group more significantly. By increasing one unit of the low stress level metric along the travel route, the relative probability of choosing cycling than other modes was 26% higher for females. However, the same change in travel route didn't have significant impacts for males on choosing cycling compared to other modes. In other words, a connected network encourages women to bike more frequently.

In addition to gender, Shi also explored income level. She divided the population by income and found that the low-income population cares more about whether the bicycle network is holistic or not. In particular, increasing one unit of the low stress level metric along travel routes was associated with a 76% higher relative probability of choosing cycling compared to other modes for the low-income group, while the impacts on high-income counterparts were not significant. In other words, a better-connected network would make low-income travelers more likely to choose biking, while for high-income residents, this trend does not exist. It’s important to note that not having safe bike lanes to ride in leads to more frequent dangerous interactions between cyclists and motorists, and that has led to more confrontations with police. The holistic connectivity of that bike route takes on new significance when we consider barriers to biking. (Watch a recent PSU Friday Transportation Seminar: Biking While Black.)

In addition to demonstrating a successful methodology that future researchers can build upon, Shi's work also highlights the importance of accurate and open access data.

"Having these data readily accessible for researchers and planners is essential. For cities that don't have these data, how can they even begin to measure the success of their investments in bikeway networks?" Shi said.

A lot of current research is focused on finding associations between ridership and network quality. In this dissertation, Shi was hoping to find some causal inference there: proof that the correlation between ridership and network quality is a cause-and-effect relationship. While this study did not prove that bike networks are the cause of increased ridership, she would like to see whether additional data, or another analytical approach, can further explore that point in the future.

One of Shi's aims in conducting the study was to provide transportation professionals with concrete evidence that if they pay attention to connecting bicycle facilities, they can anticipate an increase in ridership. In particular, the improvements in bicycle networks would disproportionately benefit disadvantaged populations, such as female and low-income groups, by increasing their probability of riding bikes. If the goal is to achieve a certain mode share or certain active transportation goals, especially targeting disadvantaged population groups, this is some concrete evidence that connected networks can support that.

To learn more about this and other Portland State University transportation research, sign up for our monthly research newsletter.