Protected bike lanes are becoming increasingly common around the United States, yet there is little guidance for how to extend the protected lanes through one of their most dangerous links: the intersection. Led by Chris Monsere and Nathan McNeil of Portland State University in collaboration with Toole Design Group, the latest report from the National Institute of Transportation and Communities (NITC) offers contextual guidance for designing intersections that are comfortable for cyclists.

WHY FOCUS ON INTERSECTIONS?

Safety and perceived comfort are the two key considerations for cities attempting to build connected low-stress networks, given the positive correlation between perceived comfort and ridership. Studies, including our Lessons from the Green Lanes: Evaluating Protected Bike Lanes in the U.S., have consistently found that people prefer bike facilities that are separated from traffic, such as off-street paths and protected bike lanes, with physical separation such as a post or concrete curb.

The preference for these separated facilities appears to be greatest amongst cyclists who ride primarily for recreation (as opposed to transportation), those who cycle less, as well as the subset of potential bicyclists who self-identify as "interested but concerned." Research suggests that providing comfortable designs may be vital to expanding the bicycling population beyond current riders.

However, studies of bicyclists’ sense of safety and comfort have generally focused on road segments, rather than the intersections of those roads. Using video microsimulations to estimate expected bicyclist and turning-vehicle interactions, researchers paired those results with in-person surveys to establish bicyclist comfort based on intersection design type and volumes.

This research did not explore actual safety in terms of crash data; we intentionally focused on the comfort question first. We limited the scope to one-way configurations and focused on the right-turning interaction between bicycles and vehicles. This interaction seems to drive many design decisions, since that is where the most movement is. 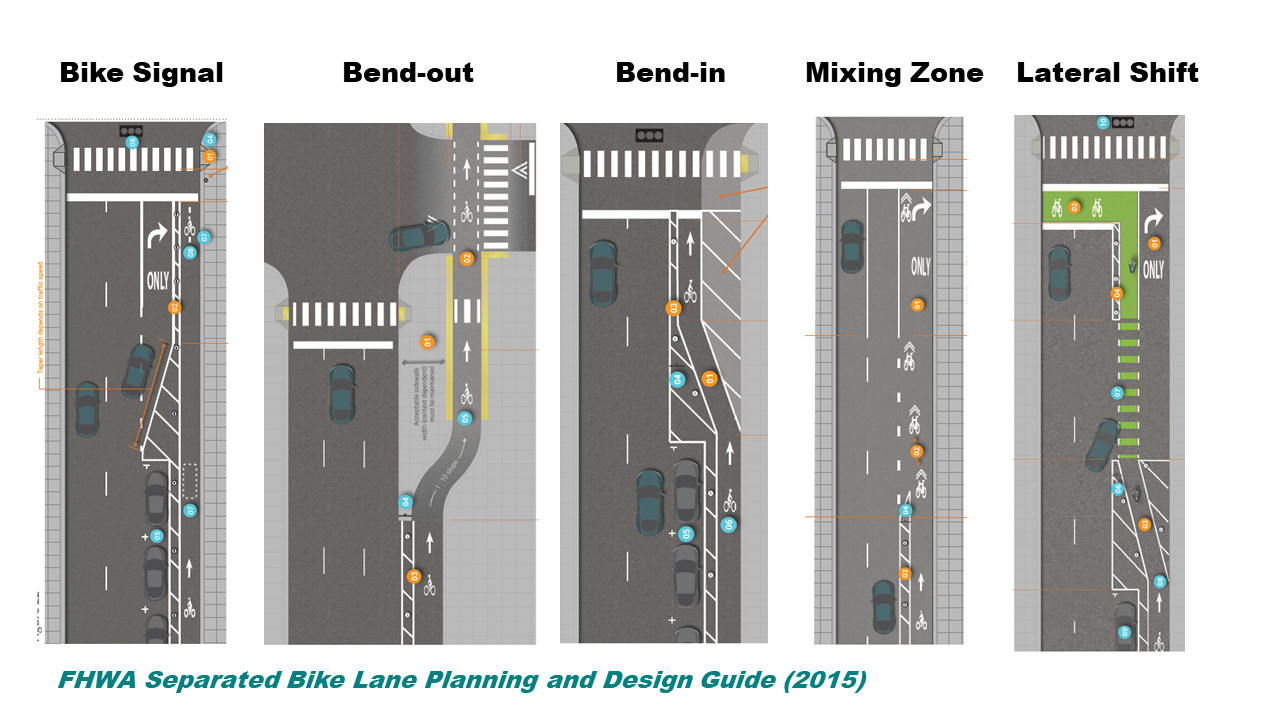 KEY TAKEAWAYS FOR PLANNERS AND ENGINEERS

The final report summarizes guidance for two broad types of cyclists; interested but concerned and bike-inclined (which encompasses both "Enthused and Confident" and "Strong and Fearless" in the classic typology). The first step is for a city to select the cyclist type they are trying to attract. Importantly, comfort scores for the "Interested but Concerned" groups suggest only the separated bike signal phase and "protected intersection" (aka bend-out) as recommended designs.

One of the key drivers of comfort, according to the results from surveys and focus groups, is minimizing the distance/time that cyclists are mixing with traffic. Key findings:

The research approach was guided by the assumption that cyclist comfort is a key desired design outcome. In-person video surveys were used to identify people’s comfort levels while bicycling through a variety of intersection designs under defined conditions (e.g., with or without interactions with turning motorists). See an example of the type of clip that was played for the participants. Video data and microsimulation models were used to inform the comparison of the design options and analyze anticipated interactions at various bicycle and vehicle volumes for each of the design options.

A total of 277 respondents rated 26 video clips showing cyclists riding through a variety of intersections, for a total of 7,166 ratings. Surveys were conducted at four locations in three states, including urban and suburban locations in Oregon, Minnesota and Maryland.

This research was funded by a pooled fund grant from the National Institute for Transportation and Communities (NITC), with additional support from Portland State University, Toole Design Group, the Portland Bureau of Transportation, the City of Cambridge, Massachusetts, SRAM Cycling Fund, and TriMet. Learn more about NITC's pooled fund program.

To learn more about this and other TREC research, sign up for our monthly research newsletter.