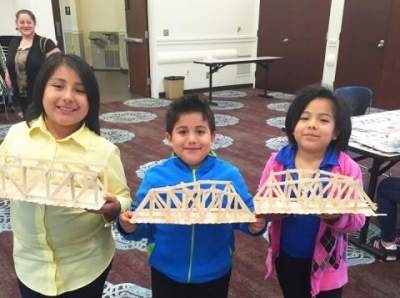 TREC supported the publication, in 2014, of the “Big & Awesome Bridges of Portland and Vancouver” book by Sharon Wood Wortman and Ed Wortman, a follow-up to 2006’s definitive volume “The Portland Bridge Book” geared toward young readers.

“Big & Awesome Bridges” has made huge strides toward advancing the knowledge of transportation engineering among area elementary school children. The book has been incorporated into the Portland Public Schools third-grade curriculum and placed in each third-grade classroom. The Vancouver Public Schools district has placed the book in each elementary school library and incorporated it into the fourth-grade curriculum.

Dozens of school and public libraries across the Northwest have bought copies of the book. Curricula in the book have been used to hold bridge-building and load-testing workshops, and the authors have held teacher trainings, activity nights and informational sessions. The book has been featured in local media outlets in Oregon, Washington and Idaho and is available at museums including the Oregon Historical Society and the Oregon Rail Heritage Center.

Current efforts are underway to bring the curricula and activities in “Big & Awesome Bridges” to students across the United States. More information on the book is at http://bigandawesomebridges.org/.

Watch the 2007 Transportation Seminar with the author here.