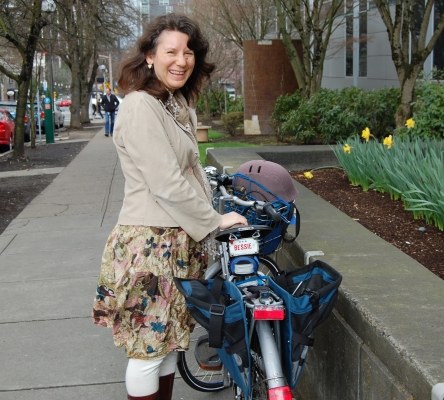 Krista with her sturdy bike, Bessie

OTREC extends a warm welcome to Research Associate Krista Nordback, Ph.D., P.E., the newest member of the team. She just moved to Portland, Oregon after finishing up her Ph.D. in Denver, Colorado, to continue working on her favorite research focus: urban bicycle safety.

Nordback has been riding bikes since before she was old enough to remember. Together with her husband, Kurt, she continues to enjoy it as a form of both recreation and transportation. When the pair moved to Portland in February of this year, one of their first actions was to bike the Springwater Corridor, the Portland metro area’s 21-mile bike trail, all the way from Portland to Boring on their semi-recumbent tandem.

As a bicycle commuter, safety is one of Nordback’s top priorities, and it’s also the primary goal of her civil engineering research. In her PhD thesis, “Estimating Annual Average Daily Bicyclists and Analyzing Cyclist Safety at Urban Intersections,” she came up with methods for determining the average number of cyclists passing through a given intersection on a daily basis. In order to increase bicycle safety measures in urban areas, one of the first steps is simple yet essential: count the bikes. Having an understanding of the numbers of bicycles that traffic through an area is the starting point for coming up with effective safety measures. Cars have been counted for decades in virtually every city in America, via automated technology such as induction loops. It’s time, Nordback says, to apply that same universal precision to counting bikes.

For her graduate thesis work, Nordback used data collected in Boulder, Colorado, mainly because there was so much of it available: Boulder is one of three cities in the United States that the League of American Bicyclists has granted “Platinum” status for bike-friendliness. The other two cities are Davis, California, and Portland, Oregon, so it’s no accident that she landed in Portland to continue her work. In her research for OTREC, she’ll be expanding upon technological methods for bicycle-counting in Portland, and coming up with ways to decrease the frequency of bicycle/motor vehicle collisions, based on the count data, in both urban and rural areas.

Nordback's position is supported by the Institute for Sustainable Solutions.