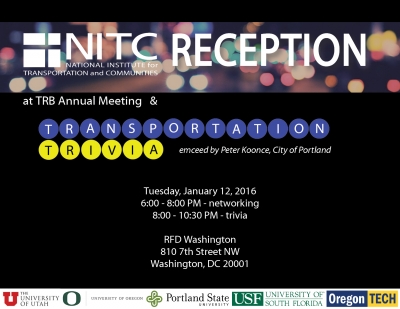 Today is the biggest day of the annual Transportation Research Board meeting for posters and presentations from NITC program affiliated campuses. The day starts with an 8:30 a.m. poster session featuring eight NITC affiliate posters and ends with the NITC reception and transportation trivia.

An "Emerging Research in Bicycling" lectern session at 1:30 p.m. will highlight two separate NITC projects. In one, Portland State University researchers Jennifer Dill and Nathan McNeil discuss their research on the "Four Types of Transit Cyclist" typologies first proposed by Roger Geller of the Portland Bureau of Transportation.

The research follows up on our earlier research, which validated the typologies for the city of Portland. The current project looks at whether it also applies nationwide.

Dill and McNeil asked a sample of 3,000 people in the 50 largest metropolitan areas in the U.S. to state their comfort bicycling in various environments, their interest in bicycling and recent behavior. They found that the distribution of people who can be categorized in the four groups: strong and fearless; enthused and confident; interested but concerned; and "no way, no how" was similar to their findings for Portland.

The findings were covered in a recent article for The Atlantic's urbanist blog, CityLab.

At the same session, John MacArthur of TREC presents research from a NITC project, "Evaluation of an Electric Bike Project at Three Employment Campuses in Portland, Oregon." The project has produced a wealth of data and products to increase understanding of e-bike use.

MacArthur's presentation gives an early peek at the results from the project. Employees at Kaiser Permanente Northwest, a health care provider and major employer in the region. Employees were given e-bikes to use for 10 weeks for various purposes, but especially the so-called "first and last miles" of their commute trips.

The employees were surveyed before, during and after the trial to see how much they biked and their thoughts about it.

MacArthur and co-author Nicholas Kobel found that participants biked more often and to more places than before the study. Their confidence on a bike also increased and they reported fewer barriers, such as hills or sweaty clothes.

The forum runs from 10:30 a.m. to noon in L'Enfant Map Room of the Carnegie Library, 801 K St. NW, just south of the convention center. You can read more about the research forum and RSVP if you can make it.

They're in Hall E and Bryan Blanc of Portland State has two of them: "How Representative of Bicycling Populations are Smartphone Application Surveys of Travel Behavior?" and "Modeling the Impacts of Facility Type, Trip Characteristics and Trip Stressors on Cyclists' Comfort Levels Using Crowdsourced Data." Fortunately, Blanc confirmed that the posters are next to each other.

>At 10:45 a.m., Keith Bartholomew of the University of Utah presents "Integrated Transportation Scenario Planning in the 21st Century. Bartholomew's research tracks the development and expansion of regional scenario planning using 25 projects completed between 2003 and 2010.

>Two NITC projects that have been presented as NITC Webinars are also on the schedule: a poster from Nathan McNeil and a Lectern Session from Reid Ewing, "How Affordable is HUD Affordable Housing."

>The NITC reception starts at 6 p.m. at RFD Washington, 810 7th St. NW, and transportation trivia begins at 8 p.m. We hope to see you there!