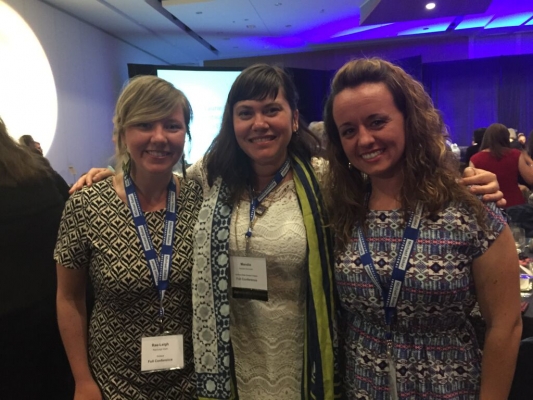 The Portland, Oregon chapter of WTS awards scholarships each year to help exceptional women advance in the field of transportation. Three of the scholarships last fall were awarded to students at NITC member campuses.

With NITC’s support, these students were able to attend the WTS International Conference in Chicago, Illinois May 20-22.

This was her first time attending the WTS International conference.

“Thanks to NITC, I was able to sit in a banquet room full of hundreds of women engineers,” Barrus said. “Being in the city itself was also a wonderful opportunity, seeing different sights and utilizing different forms of transit.”

Rae-Leigh Stark, a first year Masters of Urban and Regional Planning (MURP) student at PSU, was awarded the Gail Achterman Leadership Scholarship. She described the conference as an “awesome opportunity.”

Keynote speaker Erin Brockovich was a high point for Stark, who appreciated Brockovich’s narrative of standing up for her beliefs and facing challenges with humor. Stark also enjoyed hearing from U.S. Secretary of Transportation Anthony Foxx, and the chance to mingle with other WTS Portland Chapter members while exploring Chicago.

The keynote speech was “hands down” the highlight of the annual meeting for Miranda Barrus as well, who was inspired by Brockovich’s message about persistence, honesty and the strength it takes to be a woman in a male-dominated field.

Gonzales, a second-year MURP student, had attended the 2014 WTS International Conference in Portland, Oregon last year, and was thrilled to learn she would have the opportunity to go again, this time in Chicago.

One of the most interesting and memorable sessions for Gonzales was called “Big Challenges, Big Teams, Big Solutions.” It offered case studies of large-scale transportation challenges and how communities worked together to resolve them.

She found the Casey Arborway project particularly interesting, in which various community stakeholders worked together to destroy an unsafe overpass and replace it with a never-before-completed portion of the Emerald Necklace, the original vision for that area of Boston conceived by Frederick Law Olmsted in the late 19th century.

“One thing that I thought was cool was that they worked a lot with the community, and a lot of the community members were very educated in transportation. Improving mobility and enhancing livability by destroying a bridge? That was my favorite one,” Gonzales said.

Another session she found helpful was “Relationship Building – Making it about Them, Not You,” in which session leader Jacqueline Loewe helped attendees to develop their networking skills and connect more effectively with their peers.

“I'm trying to be more outgoing… getting out of my introversion. She gave some good tips,” Gonzales said.

WTS is an international organization dedicated to building the future of transportation through the global advancement of women. The annual conference is its ﬂagship networking event.

For more about WTS Portland scholarships, visit the scholarship page.