Individuals and groups can learn to effect powerful change, but success requires some familiarity with how civic processes work. Community Transportation Academies, or CTAs, provide a basic technical understanding of how a city or region’s transportation system operates, along with the decision makers and decision-making processes that determine how the system is shaped.

How could a free transportation class for people living in the Salt Lake City region strengthen community conversations and advocacy around local priorities in transportation policy? Researchers at Portland State University (PSU) and University of Utah (UU) explored that question by bringing a well-known learning model from Portland, Oregon to SLC.

For over 25 years, the Portland Bureau of Transportation has partnered with PSU to offer the Portland Traffic and Transportation Course – a free 10-week course designed to provide local community members the skills and knowledge to participate in transportation decisions affecting their neighborhoods. This model has proven to be a success story in public agency-university partnership in community education. Building upon a 2015 project that documented the Portland course and developed a curriculum handbook, the National Institute for Transportation and Communities (NITC) has provided more funding for a pilot community transportation class–the Wasatch Transportation Academy– in Salt Lake, City Utah. Their first class was held on January 24, 2022 (view class recordings here) and ran through...

Innovative Solutions for OR 217

No archived materials are available for this presentation.

Sharon Wood Wortman and Ed Wortman, authors of The Portland Bridge Book, and Edith Fuller, a retired PPS district librarian, are part of a volunteer effort to create The Big & Awesome Bridges of Portland & Vancouver—A Book for Young Readers. 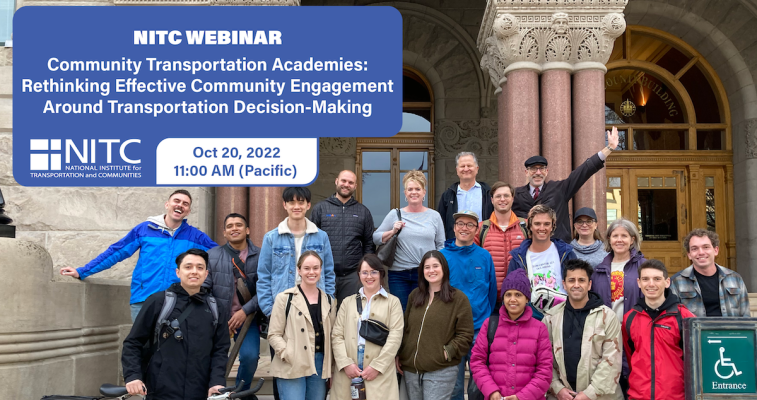 This webinar will introduce you to the concept of the Community Transportation Academy (CTA), a model which has been operating in Portland for over 30 years in the form of the Portland Traffic and Transportation (PTT) class. Now catching on in other cities, the project team recently implemented the Wasatch Transportation Academy (WTA) in Salt Lake City. The presenters also include key stakeholders (and guest lecturers) in the WTA, and the PTT instructor. The presentation will include discussions about why CTAs can be good for both community members and transportation agencies/practitioners, and how you can bring a CTA to your city.

This webinar is based on a study funded by the National Institute for Transportation and Communities (NITC) and conducted at Portland State Uhniversity and the University of Utah. Read more about the research: Launching the Wasatch Transportation Academy....

Summary: Current fixed-route transit service provided by Salem-Keizer Transit is inefficient in the low-density neighborhoods of West Salem, South Salem, and Keizer. The lack of sidewalks, non-gridded circuitous streets, and large single-family residential lots all contribute to a lack of ridership. As a result, traditional fixed-route transit service is not cost-effective in these areas. Through a five month planning process, a group of Portland State University graduate students, better known as Paradigm Planning, tackled the task of addressing this problem in each of the three study areas. Paradigm’s planning process explored mode and route options in order to produce a plan that provides innovative and feasible alternatives to current transit service that will better meet the needs of the community. Through an intensive community engagement process, the residents in each neighborhood were given a voice in shaping the future of transit in their neighborhood.

A Recipe for an Online, Geospatial Transit Performance Archive

Summary: Where and when does overcrowding happen on TriMet's bus network? Which routes have the best on-time performance? Portland State University and TriMet have collaborated to make this kind of data available to anybody through Portal, PSU's transportation data archive for the Portland/Vancouver region. This presentation will cover the use of General Transit Feed Specification (GTFS) data for mapping TriMet’s performance data and the development of Portal’s innovative transit application. In the MAP-21 era of performance management, see how tools like Portal can support enhanced agency decision-making as well as community engagement.

Bio: Jon Makler researches and teaches about transportation planning and engineering at Portland State University. His research portfolio centers on intelligent transportation systems, including how they can be harnessed to benefit the environment and how the data they generate can support operational strategies and planning decisions. Since moving to Oregon 9 years ago, he has worked at Metro, the City of Portland and OTREC, the federally-funded research center housed at PSU. His previous employers were the North Jersey Transportation Planning Authority, the Harvard Kennedy School, IBI Group and Sarah Siwek & Associates. He earned a B.A. from...

Summary: How do you explain complex ideas? What do you say when reporters ask you to guess about the future? ODOT spokesperson and public affairs manager Dave Thompson will share tips on how to explain a complex topic to reporters and concerned citizens.

Thompson worked as a broadcast news reporter, producer and anchor for 20 years, including anchoring the weekend news at KPTV from 1992 to 2000. He’s been in public relations another 14 years, leading pre-IPO angel-invested startup branding efforts and providing company and government agency perspective to reporters and citizens. And of course, apologizing for Portland’s congestion and warning us about driving in snowstorms.

But Dave didn’t start out in communications: He was a math major! His message: With practice, you can and should speak in public, if you’re prepared and when you’re the subject matter expert. (If he can do it, you can do it!)

Dave will show you how to engage your audience’s imagination to explain the complex...

Summary: The Transportation Planning Analysis Unit (TPAU) at ODOT helps to provide information to a large variety of transportation plans, projects, and policy questions.  This allows customers to make better informed decisions and to maximize limited resources.  In order to fill this role TPAU and the Oregon modeling community have a fairly large "toolbox" of models and analysis tools and procedures.  This transportation seminar will give an overview of the role and services that TPAU provides and the different tools and processes used to fulfill that role.

The history of the Columbia River Highway is a tale of visionaries, civic leaders, skilled engineers and talented artisans. In 1913, Samuel Lancaster designed the first 20 miles of what is now known as the Historic Columbia River Highway Lancaster’s work resulted was a world class scenic highway that once stretched from Portland to The Dalles.

Starting in the 1940s, the construction of a freeway through the Columbia River Gorge severed the original route in a number of locations. The Oregon Legislature in 1987 directed ODOT to preserve and enhance existing portions of the historic highway. Much work has been accomplished since that date. However, 12 challenging miles remain. Interested groups have joined together to advocate for the completion by 2016, the 100th anniversary of Lancaster's masterpiece.

This presentation will provide an overview of the history, current status, and future plans with specific emphasis on technical issues relevant to the surveying and engineering communities. An opportunity will be provided for questions.