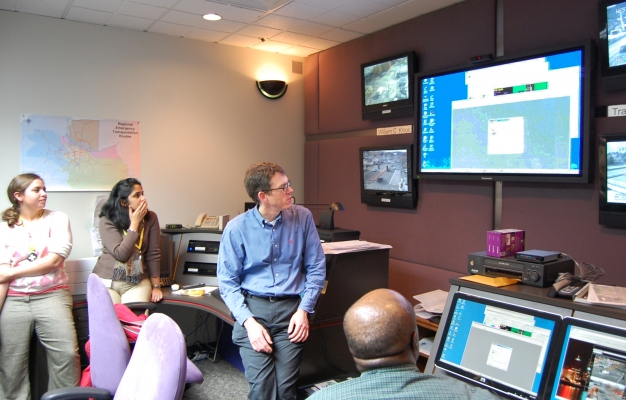 In town to network and share research results, participants in the Region X Student Transportation Conference also saw the inner workings of the transportation system and even got to stop Portland traffic.

The ninth annual conference drew around 75 people to Portland November 18. The conference showcases student transportation research in Oregon, Washington, Idaho and Alaska and is entirely organized and run by students.

Portland State University’s student group, Students in Transportation Engineering and Planning, or STEP, hosted the conference, which was sponsored by OTREC. The conference provides plenty of formal and informal opportunities for students working at different universities to inform each other, said Kristi Currans, an organizer with STEP.

“My favorite part is just having all the students get together and find out all the research everyone is doing,” Currans said. “Even within Portland State, if people are working for different professors, I might not know what they’re working on.”

At the conference, University of Oregon planning graduate student Cortney Mild was named OTREC student of the year. Mild will be honored alongside other U.S. DOT university transportation center students of the year at the annual meeting of the Transportation Research Board January in Washington, D.C.