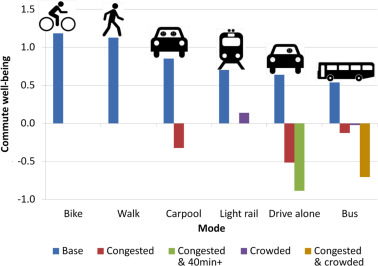 Oliver Smith, a former NITC dissertation fellow with a Ph.D. in Urban Studies from Portland State University, published research findings last month in the Journal of Transport and Health.

The study includes evidence that walking and biking have a significant positive effect on wellbeing, and suggests that bicycling to work may benefit mental as well as physical health.

The article grew out of Smith’s dissertation, a NITC-funded research project on the connection between commute modes and happiness or well-being.

Visit the project page to learn more: Peak of the Day, or the Daily Slog?

Smith created a measure of how individuals feel about their commute to work: CWB, or “commute well-being.” To quantify a person’s CWB, he used a composite measure based on seven questions that measure both emotional and cognitive responses to the commute.

He surveyed commuters traveling to work in central Portland, Oregon using car, public transit, and bicycle. They were asked about their attitudes and travel preferences and about their overall satisfaction with life. The research was guided by the question, “What factors contribute to wellbeing in the domain of commute travel?”

In general, cyclists reported the greatest satisfaction with their commute, closely followed by people who walk, then users of transit and other modes, as shown on the graph above.

Shifting travel modes away from single-occupancy car use, which ranks second-to-last on the satisfaction scale, is a primary goal of transportation planners. The findings from this study add evidence that could inform policymakers on how to create more sustainable transportation policies.

Smith suggests that future studies could expand the survey with additional questions, to increase our understanding of social comparisons, seasonal influences, and route choices on commute well-being.