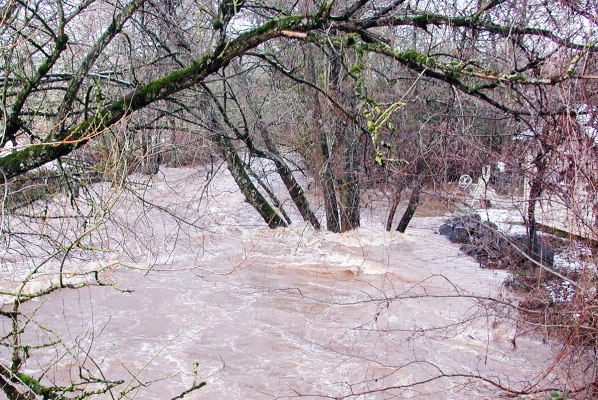 Johnson Creek in Portland, Ore., floods in this 2009 photo. An OTREC research project has found that climate change adds at least $20,000 per year for public agencies to address flooding. (Creative Commons/Wikimedia user: Finetooth)

Of all effects of the climate on transportation, the most costly results from flooding in cities. Flooding disrupts urban life, causing expensive repairs, delays and hazards to address. In the Pacific Northwest, these effects are projected to worsen as human-caused global warming brings wetter weather and higher water tables.

Despite these projections, little research had focused on the effects of increased flooding on the transportation system and how those effects could be lessened. OTREC opened the door to this area of research with a project called Future Flooding Impacts on Transportation Infrastructure and Traffic Patterns Resulting from Climate Change. The final report is available to download here.

The project brought together scholars from Portland State University in the disciplines of geography, civil and environmental engineering, and urban studies and planning with officials from regional government Metro. The researchers also included regional stakeholders invested in their communities and watersheds to guide the project.

Researchers looked at two creeks in the Porltand, Ore., area and attempted to arrive at direct and indirect costs of typical flooding. They found that a typical annual flood event costs public agencies nearly $150,000 in direct costs including staff and reconstruction costs. A road closure or limited use also causes indirect costs, disrupting and delaying traffic and supply routes to businesses, and the researchers broke down many of these costs.

In all, the researchers concluded, climate change in urban creeks will add a cost of $20,000 per year, assuming no one dies from a flood. That number spikes to $280,000 per year if someone dies during a typical 10-year flood cycle.

The costs of higher flood risk were harder to assess and not included in these estimates. Those risk costs include decisions to improve infrastructure to avoid flooding and to change land uses to lessen future flooding or its effects.

Despite the necessary simplifications involved and lack of key data to test hypotheses, this study marks the important first step of providing a cost range to guide public officials’ decision making and inform future research. No other research had produced estimates for the cost of climate change or even flooding in the Portland region.