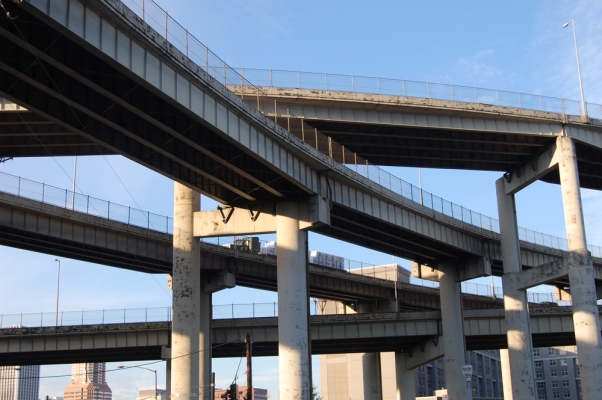 Older concrete continuous bridges, the most common type in Oregon, are more vulnerable than previously thought to damage from soil motion during earthquakes. Researcher Peter Dusicka, a Portland State University associate professor, examined the bridges for an OTREC project.

To find that out, he had to first know how the ground in the Pacific Northwest moves during and earthquake and second, model how the bridge type would react to these motions. Historical and geological evidence show a catastrophic earthquake will occur sooner or later in the region, Dusicka has said, as the Cascadia subduction zone stores up energy that will be released at some point. (Click here to read more about Dusicka’s work regarding subduction zones.)

He collected ground motion data to see what demands a quake would put on bridges and then modeled how much the bridges can take before becoming damaged. The answer: not much. Even low levels of ground motion would cause moderate or extensive damage to bridges. Although it took a larger increase in intensity for bridges to completely fail, extensively damaged bridges would be unsafe and unusable, causing major disruptions to the transportation system.

While these results were more dire than other research had concluded, Dusicka’s research also offered some encouraging news. A retrofit, common in California bridges, would work well for Oregon’s bridges during an earthquake. Wrapping a steel jacket around the bridge column makes the bridge significantly less fragile, making complete bridge failure 46 percent less likely.

The project is “Seismic Damage State Models for Oregon Bridges.”