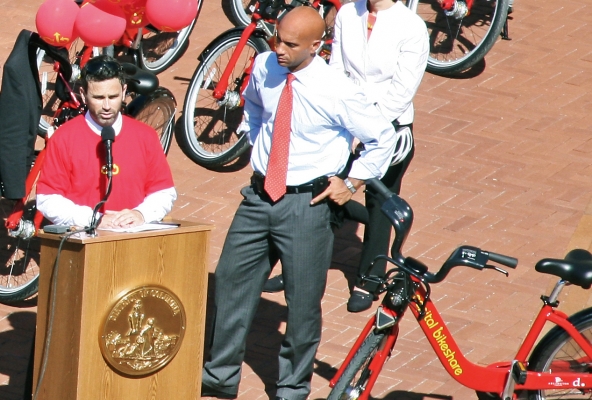 Former D.C. Department of Transportation Director Gabe Klein speaks at the lauch of the Capital Bikeshare program, which allows users to rent bicycles at one point and return them at another.

For having made his career pursuing creative solutions to transportation problems, Gabe Klein cautions against getting too complex. We already know how to make livable cities, said Klein, the former director of the District (of Columbia) Department of Transportation: get people walking and bicycling.

“The bike is as old as I don’t know what,” Klein said. “But the trend is toward taking an old technology and making it easy to use and secure.”

For the Washington, D.C., area, that has involved bike sharing. The successful Capital Bikeshare program Klein oversaw has made the red rental bikes ubiquitous and taken away many of the excuses people use not to cycle, including parking, maintenance and the inability to bring a bike on long trips.

Klein will discuss his experience with Capital Bikeshare in a free seminar in Portland on Friday, April 8. He’ll work his way up the Willamette Valley Wednesday and Thursday as part of the Sustainable Cities Initiative at the University of Oregon, one of three OTREC initiatives.

Although cyclists must pay for Capital Bikeshare rentals, Klein said he aimed to avoid pricing people out of cycling. “We wanted to price it below any other form of transportation,” he said. “And we wanted to make it available to tourists and local people for trial usage.”

Because single-day rentals cost more per use than do memberships, Klein said, tourists bring more money to the program. They also rent fewer automobiles to clog D.C. streets.

And locals can dabble without buying a bike. “I think that usage will continue to go up,” Klein said. “People try it and get a membership.”

Klein calls himself a pragmatist: he’s not an engineer or planner but he’s not afraid to explore different approaches. “When I talk about innovative thinking, I mean simplistic actually,” he said. “It’s about rebalancing the right of way.”

Cycle tracks and other separated facilities do a great job in encouraging people to bicycle who otherwise wouldn’t, Klein said. But he’s also helped push nonmotorized transportation on city streets by limiting speed limits by lane and letting drivers know they have to yield to all other users.

“You give the priority to cyclists, people on roller skates, those little scooters—you see so many obscure modes—and then you dedicate the sidewalks to pedestrians,” Klein said. “You have to think of who has the primary use of those lanes, and who has use of those lanes.”

Although Klein calls the solutions simple, that doesn’t make them easy, especially politically. He took heat from District residents for adding bicycle lanes.

“You have fear of change. Period,” he said. “There’s so much change going on in this country that the roadway, the right of way, bike lanes have become symbolic of different things. People want to hold on to the things they grew up with. It’s much bigger than the bike lanes.

“It’s nonsensical,” he said. “It’s wasted space on the side of the road, and studies say that when you put in bike lanes, it makes everybody safer; it slows traffic.”

Although his cycling efforts have received much attention, Klein once served as an executive for car-sharing company Zipcar. He still advocates for car sharing, but thinks the existing setup needs rethinking. “The model of having dedicated spaces in a city is sort of outmoded,” he said.

Car sharing in the future could look more like bike sharing in the capital does now. “I see it being more point to point,” he said. “It will be more focused on the technology in your cell phone alerting you to the nearest vehicle versus having a dedicated space.

“We’re going to see a cross-pollination of car sharing, bike sharing, jitney buses and advancements in technology to allow people to use unutilized space in vehicles,” Klein said. “People are somewhat agnostic about modes; they just want to get where they’re going.”