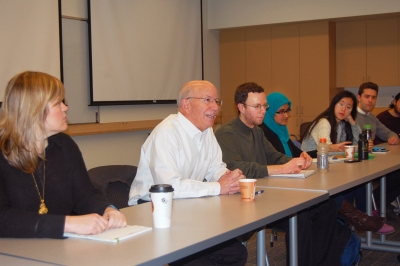 Prof. Kelly Clifton had planned for students in her “Theories And Methods Of Travel Behavior” course to give final presentations March 11. But the course had just wrapped up a unit on public policy.

DeFazio used the session to field questions about his work on the House Committee on Transportation and Infrastructure and to get ideas for solving problems before the committee from some of the country’s most respected transportation students.

Topics included alternatives to the gasoline tax, health, performance measures and behavior modification. Around 25 students attended, including some from outside the travel behavior course.

As the top Democrat on the Subcommittee on Highways and Transit, DeFazio looks for ways to deal with deteriorating infrastructure. Faced with questions on the intersections between transportation and disciplines such as health and education, DeFazio acknowledged how much struggles in one area affect others.

“There’s a whole host of things we’re not investing in,” DeFazio said. If properly funded, he said, programs such as Safe Routes to School can improve all the disciplines they touch.

But the federal gas tax hasn’t budged in decades, and the money raised pays for fewer and fewer improvements. “Every year, it gets a little worse,” DeFazio said.

DeFazio mentioned his effort, called the Repeal and Rebuild Act, to repeal the federal gas tax and replace it with a per-barrel oil tax. Eliminating ethanol subsidies would save enough money to avoid an increase in the gas tax, DeFazio said, although such a move probably wouldn’t get through Congress.

The visit highlighted the gap between research and policy, as DeFazio countered some of the proposals students posed with the political realities he faces. Congress won’t turn to road-user fees, for example, in the next transportation bill. “We’re not there yet,” DeFazio said. “We’re not ready to go there.”

Nick Kobel, a transportation graduate student, pressed DeFazio to support strategies that reduce reliance on greenhouse gases, such as encouraging people to live closer to work. Even when facing an issue as profound as climate change, DeFazio said, Congress has no appetite for behavior modification.

“It’s something planners love to talk about,” he said. “You’re not going to hear many policymakers talk about it.”

Congress has made its own job harder in eliminating so-called “earmarks” for projects within representatives’ districts, DeFazio said. Such congressionally directed projects make it easier to show residents what they get in return for their taxes.

DeFazio added language to the 2005 transportation bill that created the original OTREC consortium, which later became TREC. That effort has brought millions of dollars to Oregon’s universities and positioned the state as a national leader in transportation research and education.

1950s transportation leaders successfully sold their vision of the Eisenhower Interstate Highway System, he said. Policymakers today need a new vision – and a better way of communicating that vision – to sell any new funding.