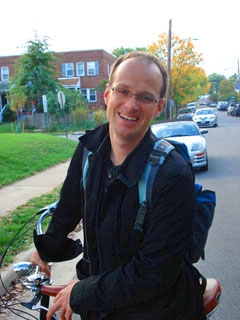 What makes Americans’ travel behaviors so different from that of their West European counterparts? Longer trip distances? Higher rates of licenses and auto-ownership? A culture and economy that depends on the automobile industry? According to visiting scholar Ralph Buehler, none of these explain the differences in mode splits.

In partnership with Students in Transportation Engineering and Planning (STEP), Portland State University recently hosted visiting scholar Ralph Buehler at the Friday Transportation Seminar series. Dr. Buehler traveled west from Washington, D.C. where he is an Assistant Professor in Urban Affairs and Planning at Virginia Tech’s Metropolitan Institute. Dr. Beuhler’s research and expertise is in multimodal planning and travel behaviors, with a focus on Western Europe and North America.

Dr. Buehler’s presentation, titled “Making Urban Transport Sustainable: Comparison of Germany and the US,” poked holes in many of the common theories explaining why Americans are more likely to use their cars for all their travel needs. Instead, he noted that, “transport policies have to explain the difference [in mode shares] over time, including the changes that have happened in Germany and those that have not happened in the US. ” His research has led him to identify four major policy areas that have contributed to Germany’s success in shifting mode shares:

1. Policies that restrict car use

4. An integration of land use and transportation planning

The seminar was widely attended by students and members of Portland’s transportation planning industry. The conversation continued over a lunch hosted by OTREC, where students and faculty had a chance to engage Buehler in some of their own research findings.

The education resumed in the afternoon, when Portland Bureau of Transportation engineer and bike planner Peter Koonce, along with STEP’s Kirk Paulsen, led Dr. Buehler on a whirlwind bicycle tour of Portland’s best multimodal infrastructure. A few highlights of the ride included the cycle track along Moody Avenue, recent improvements on the I-84 overcrossing at 12th avenue aimed at improving bike and freight movements, neighborhood greenways, bike/ped signals, and bike counters installed along the bridges. The route, seen here, also offered an opportunity to evaluate intersections where Portland could do better, perhaps taking a page from our German counterparts.