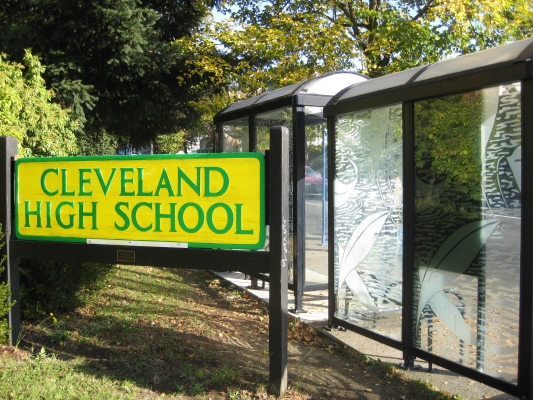 Cleveland High School came full circle Feb. 12 with an OTREC presentation on some of the transportation and air-quality research performed in these very bus shelters.

Students at Portland’s Cleveland High School learned on Tuesday that their school sits at the heart of pioneering transportation research. The school is at the corner of Southeast 26th Avenue and Powell Boulevard, a corridor in which a variety of advanced traffic management technologies have been installed.

In Oregon every February, the Business Education Compact helps match thousands of professional engineers who volunteer to teach in classrooms from elementary through high school. The goal is to raise student awareness of the opportunities and rewards of working in science, technology, engineering and math (STEM) fields.

This is the third year of volunteering for Makler, who developed a lesson plan that describes the many ways that transportation relies on STEM skills, including engineering. After watching helmet cam footage of biking in downtown Portland, students used basic algebra to learn about how traffic signals are timed to make streets safe and efficient for people in cars, on bike or on foot.

But Moore stole the show as he explained how various devices at the intersection of Powell and 26th help manage traffic. Students were most impressed by transit signal priority, which allows buses to request extra green time in order to maintain their schedules. Students were amazed by the amount of technology at their intersection and asked lots of questions about Moore’s picture of the inside of a traffic signal cabinet.

In addition to traffic management, Moore also described the research he is doing with Portland State professor Miguel Figliozzi to examine air quality along Powell. Figliozzi and Moore have evaluated the impact of bus shelter orientation on pollution exposure and found that shelters that face toward the roadway, such as the one outside Cleveland High, are “dirtier” than those that face away.

Students also examined the trade-offs between planes, trains and cars for intercity travel, calculating travel times between Portland and Seattle and debating the merits of building high-speed rail. Finally, they examined the issue of cost and value of time while evaluating their options for an after-school trip to a nearby shopping mall.

The highlight for Makler came at day’s end. “I was waiting for my bus outside the school at 3:15 and one of the students from early in the day came up to me. ‘Your class gave me an idea’ he said. ‘What if all of these devices in cars and at the intersection allowed drivers to know the speed that would get all green lights?’ and I realized he had come up with USDOT’s ‘Connected Vehicle Initiative’ in about 2 hours.”