Speaker Hyunsoo Noh, a PhD Candidate from the University of Arizona, will discuss the integration of schedule-based public transportation and other transporation planning models.

Abstract: The California High-Speed Rail Ridership and Revenue Forecasting Model is a state-of-the-practice transportation model designed to portray what future conditions might look like in California with and without a high-speed train. The model was developed by Cambridge Systematics, Inc., and took roughly two years to complete. The resulting ridership and revenue forecasts provided, and continue to provide, sound information for planning decisions for high-speed rail in California. This presentation briefly describes the underlying model that was developed to generate the ridership and revenue forecasts along with summaries of ridership forecasts from published reports. 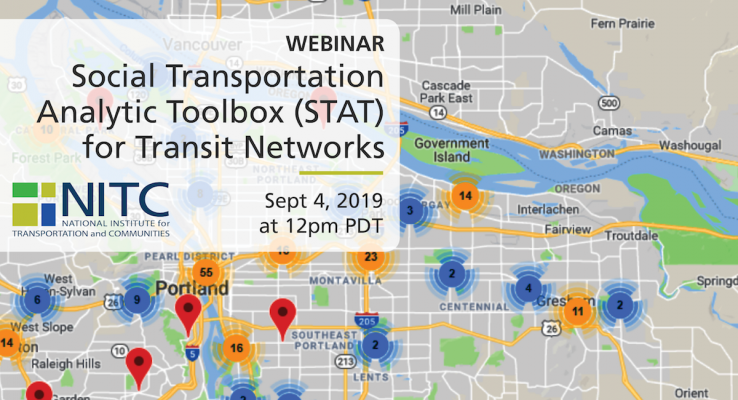 Miss the webinar or want a look back?

This webinar will present an open-source socio-transportation analytic toolbox (STAT) for public transit system planning. This webinar will consist of a demonstration of the STAT toolbox, for the primary purpose of getting feedback from transit agencies on the tool's usefulness. We are especially interested in hearing about any improvements that would aid transit agencies in implementing it.

The STAT toolbox was created in an effort to integrate social media and general transit feed specification (GTFS) data for transit agencies, to aid in evaluating and enhancing the performance of public transit systems. The toolbox enables the integration, analysis, and visualization of two major new open transportation data sources—social media and GTFS data—to support transit decision making. In this webinar, we will introduce how we...

Abstract: TriMet collects detailed ridership data from automatic passenger counters on buses and trains. In addition, an automatic vehicle location system provides specific information on how well buses and trains adhere to preset schedules. This presentation is an overview of how TriMet uses these data in designing and managing the transit network, ranging from developing regional service policies to making minor schedule adjustments on a bus line.

Speaker Bio: Ken Zatarain is TriMet Director of Service Planning and Scheduling. He has had several other positions at TriMet. Prior to joining TriMet, he worked at the federal and local government levels. Ken has a degree in Regional and City Planning from the University of North Carolina.

In the Engineering Building, Room 315

Abstract: Signal priority applications in the U.S. tend to be timid about giving priority to buses, because if they interrupt the green period of a competing traffic stream, they have no means of compensating that stream in the next signal cycle (by giving it a longer green period). Common restrictions set up to protect cross streets include preventing a priority interruption in consecutive signal cycles, having short extension intervals, and inhibiting priority when traffic is heavy on the cross street. In addition, most priority applications are limited to one or two simple control tactics, green extension and early green. As a result of these limitations, transit signal priority often falls far short of its potential, saving buses 3 seconds or less per intersection. We show how by using multiple intelligent signal priority tactics, in which traffic is aggressively interrupted but also compensated in the following cycle, large benefits can accrue to transit operations without any undue effect on general traffic. In a simulation study of four traffic signals around a large bus terminal in Boston, we found that average delay per bus could be reduced by almost 20 seconds per intersection with no change in average motorist delay.