Active transportation investments offer many types of benefits related to safety, reduced greenhouse gas emissions, physical activity and the economy. Metro, Oregon’s regional government for the Portland metropolitan area, wants to better understand the role of these investments in building stronger communities in their region, and in implementing the Metro 2040 Growth Concept. 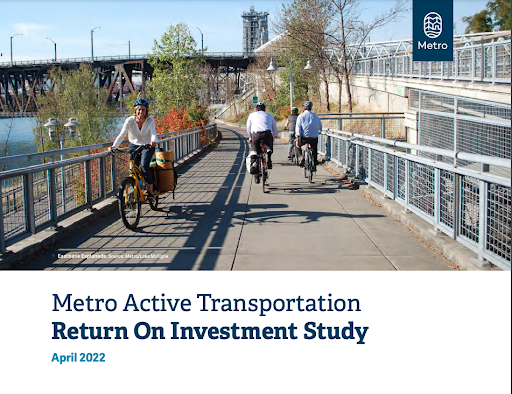 Led by Portland State University in partnership with Metro, the Active Transportation Return on Investment (ATROI) study looked at twelve projects constructed in the greater Portland region between 2001 and 2016. These twelve 2040 Catalyst Projects were evaluated to determine if active transportation investments had significant effects on the local economy. 2040 Catalyst Projects retrofit busy commercial streets with pedestrian-friendly treatments to catalyze economic development within 2040 Centers, Main Streets, or Station Communities. "Taking both a quantitative and qualitative approach was important, so we could better understand the numbers and hear directly from the people, including customers and business owners, about the value of the projects. However, our work was done mainly in 2020, so we had to get creative in how we found those people, including an online survey and social media.," Dill said.

Overall, the research team found positive effects on business activity in the retail and/or food sectors, demonstrating that the potential economic benefits are not just in more urban parts of the city of Portland:

"The findings reveal that these types of investments can have positive outcomes in places outside of downtown and inner Portland, particularly when coupled with other planning and infrastructure investments, but that we do need to address the negative effects of high speed, multi-lane arterials," Dill said.

Together they help us understand many of the benefits of these recent active transportation projects that used regional flexible funding in the past. One of the most important outcomes of the study is informing the region’s decision makers, business owners, and the general public in the recent public comment period for Metro’s Regional Flexible Funding Allocations (RFFA) for transportation projects. With 29 project proposals on the table, it’s important to have the context and data on what has been effective in the Portland region.