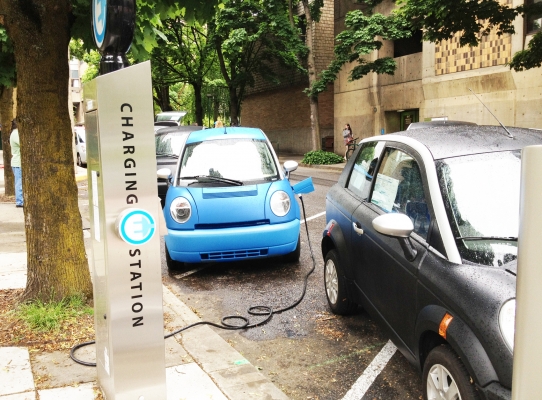 Widespread adoption of electric vehicles won’t happen without convenient charging points. But who should provide charging stations? Where should they be located? And how should they be set up?

Those are a few of the questions addressed in an OTREC report on the unique charging-station hub known as Electric Avenue. A block-long bank of chargers on the Portland State University campus, Electric Avenue provides an ideal test site for those seeking to prepare the way for electric vehicles.

Electric Avenue opened in August 2011 with eight parking spaces where vehicle owners can use a variety of chargers for free, paying only the cost of parking. Some chargers can recharge a battery in 30 minutes and others require hours per charge.

As the first installation of its kind, Electric Avenue illuminated both the promise and the difficulties electric vehicles represent. The report concluded that similar projects would be viable elsewhere, especially if planners and policy makers learn from the Electric Avenue experience, including: 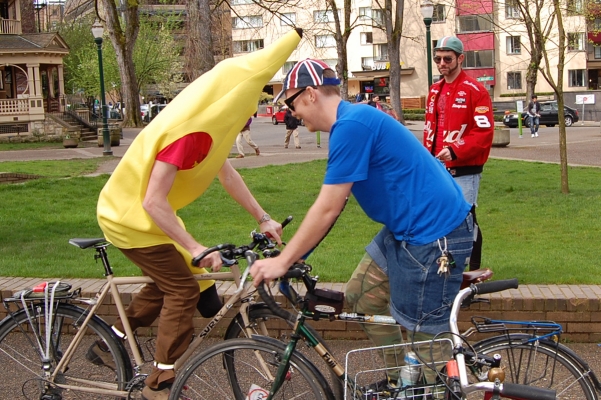 Teams competed in games such as Urban NASCAR, which included slow-biking and gummy worm-eating components, and the noncopyright-infringing “Astonishing Rush” scavenger hunt. The first-year master of urban and regional planning, or MURP, students took the participation award, with 16 competitors, while the best department award went to the second-year MURPs.

The best team award went to Team Jellis, composed of Jamie Jones and Scotty Ellis. More awards are at the STEP website.

Photos are after the jump.

The Oregon Transportation Research and Education Consortium would like to congratulate two of its affiliated students who took home hefty scholarships this past week from the Women’s Transportation Seminar (WTS).

Kristi Currans of Portland State University and Jessica Bloomfield of the University of Oregon were both awarded scholarships at a May 26 dinner at Wilf’s in Union Station. The Women’s Transportation Seminar was established by the federal government with the goal of transforming the transportation industry through the advancement of women. Overall, WTS awarded $15,500 in scholarships this year to women pursuing higher education and careers in transportation.

Currans, a graduate Civil Engineering student at PSU, took home a $3,500 Graduate Scholarship. She holds an undergraduate degree in Civil Engineering from Oregon State University, where she was named Student of the Year in 2010. Currently, Curran is working with travel demand modeling as part of a workforce training program between PSU and the Oregon Department of Transportation. Active in the American Society of Civil Engineers,

To look at how buses, light rail, street cars, and bicycling have all become prominent modes in Portland, you need to trace back to important land use decisions made three decades ago. In 1974, Oregon adopted statewide land use planning goals. These goals shifted planning efforts away from freeway-building, toward investment in alternative forms of transportation. Since then, Oregon has been a leader in pushing back against car-centric landscapes and lifestyles. In this OTREC project, Professor Carl Abbott and Sam Lowry of Portland State University traced the history of land use planning in Oregon from 1890-1974. One of the projectís aims is to make transportation planning relevant and compelling to a broad audience. To do so, Abbott and Lowry gathered stories and information from a wide range of sources who enthusiastically shared their knowledge of transportation history. You can download the report to read more: https://ppms.trec.pdx.edu/media/project_files/OTREC-TT-10-01.pdf

A Visit with Mike Quear

OTREC participated in a research and technology funding discussion led by Mike Quear, congressional staffer. The visit consisted of two parts: a discussion with the Deans and faculty representing the major sciences at Portland State University; and a tour of the OTREC including highlighting collaborative research undertaken by the ITS Lab and electric vehicle initiatives being supported by OTREC. Mike Quear is Staff Director for the Science and Technology Committee’s Subcommittee on Technology and Innovation. He has worked for the Committee for the past 19 years. We always look forward to the thought provoking discussions that his visits provide.

This OTREC educational project took students at Portland State University beyond the lecture hall and the library. Dr. Lynn Weigand expanded the bicycle and pedestrian design curriculum at PSU by turning an existing three-credit course into a five-credit course with an applied lab. The new course gave students the opportunity to apply the knowledge they gained in class to real projects in their community. Working in teams, the students developed projects that focused on improving bicycle and pedestrian connections to the PSU campus. The course received excellent reviews from the students, and the department recognized the courseís value by offering it again the following year. The report can be downloaded at: https://ppms.trec.pdx.edu/media/project_files/OTREC-ED-10-01.pdf.

Portland State University faculty and students presented their work at the National Urban Freight Conference (NUFC) in Long Beach, CA October 21-23, 2009. Dr. Miguel Figliozzi presented "Emissions & Energy Minimization Vehicle Routing Problem" and "A Study of Transportation Disruption Causes and Cost in Containerized Maritime Transportation." Also, graduate research assistants Ryan Conrad and Nikki Wheeler presented research projects sponsored by OTREC. Ryan presented "Algorithms and Methodologies to Analyze and Quantify the Impacts of Congestion on Urban Distribution Systems Using Real-world Urban Network Data" and Nikki presented "Analysis of the Impacts of Congestion on Freight Movements in the Portland Metropolitan Area." NUFC brings together researchers and practitioners in the public and private sectors from many disciplines within freight transportation. This conference is the only one of its kind in the US, and brought attendees and presenters from across the US, Canada and Europe.