Portland State University (PSU) graduate Michael McQueen surveyed nearly 2,000 PSU students in his masters thesis, "Comparing the Promise and Reality of E-Scooters: A Critical Assessment of Equity Improvements and Mode-Shift," to learn about their travel behaviors, preferences and barriers to using e-scooters.

WHAT DOES A UNIVERSITY CAMPUS REVEAL ABOUT E-SCOOTER USAGE IN THE CITY?

PSU students offer an easily-accessible large population with the shared experience of frequently traveling to a specific urban location–the PSU campus in downtown Portland. The survey sample closely represented the university’s full student population by racial makeup. The sample was more racially diverse than the Portland metro area and it captured twice as many female respondents as male respondents, which resulted in models that contained smaller margins of error for racial minority and female coefficients. This is critical to understanding the equity impacts. Given the university setting, it was largely skewed towards younger and lower-income respondents. The upside is that this demographic is typically considered more progressive in their transportation choices, which renders McQueen’s findings about their use and perceptions of non-car modes as conservative when compared to the Portland metro area as a whole. 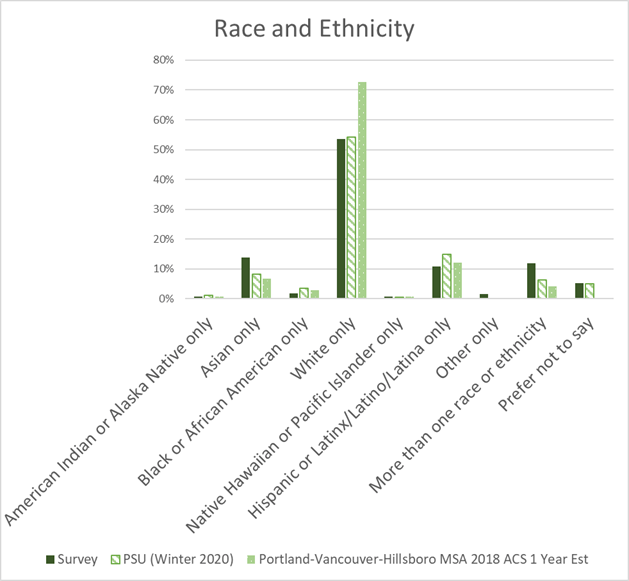 Students were asked how they currently use and perceive e-scooters, and which mode they would choose (between a car, bike, or e-scooter + light rail combination) to get to PSU in a stated choice experiment. Respondents chose their preferred mode in several hypothetical scenarios where the travel times and costs varied. McQueen then developed a model from the experiment which controlled for travel time, cost, sociodemographics, health, travel behavior, and latent attitudes towards the travel modes.

The statistical model revealed that e-scooters in combination with MAX light rail were not regarded as the most preferred mode for getting to campus anywhere in the metro region, given current pricing and travel times. McQueen concluded that cities should not depend on e-scooters as a de facto first-mile/last-mile solution without targeted management interventions.

So which factors influenced mode choice for traveling to PSU? Some findings that stood out:

McQueen applied the model spatially to Portland, to understand catchment areas where the average respondent would prefer which mode given realistic travel times and prices. The below maps illustrate the catchment areas. In these maps, the color indicates the most likely mode choice at that location, and the intensity of the color indicates the probability that it would be chosen among the three modes.

Currently, there is no place in the metro area where using e-scooter + MAX is the most preferable mode choice, on average (note there is no yellow): 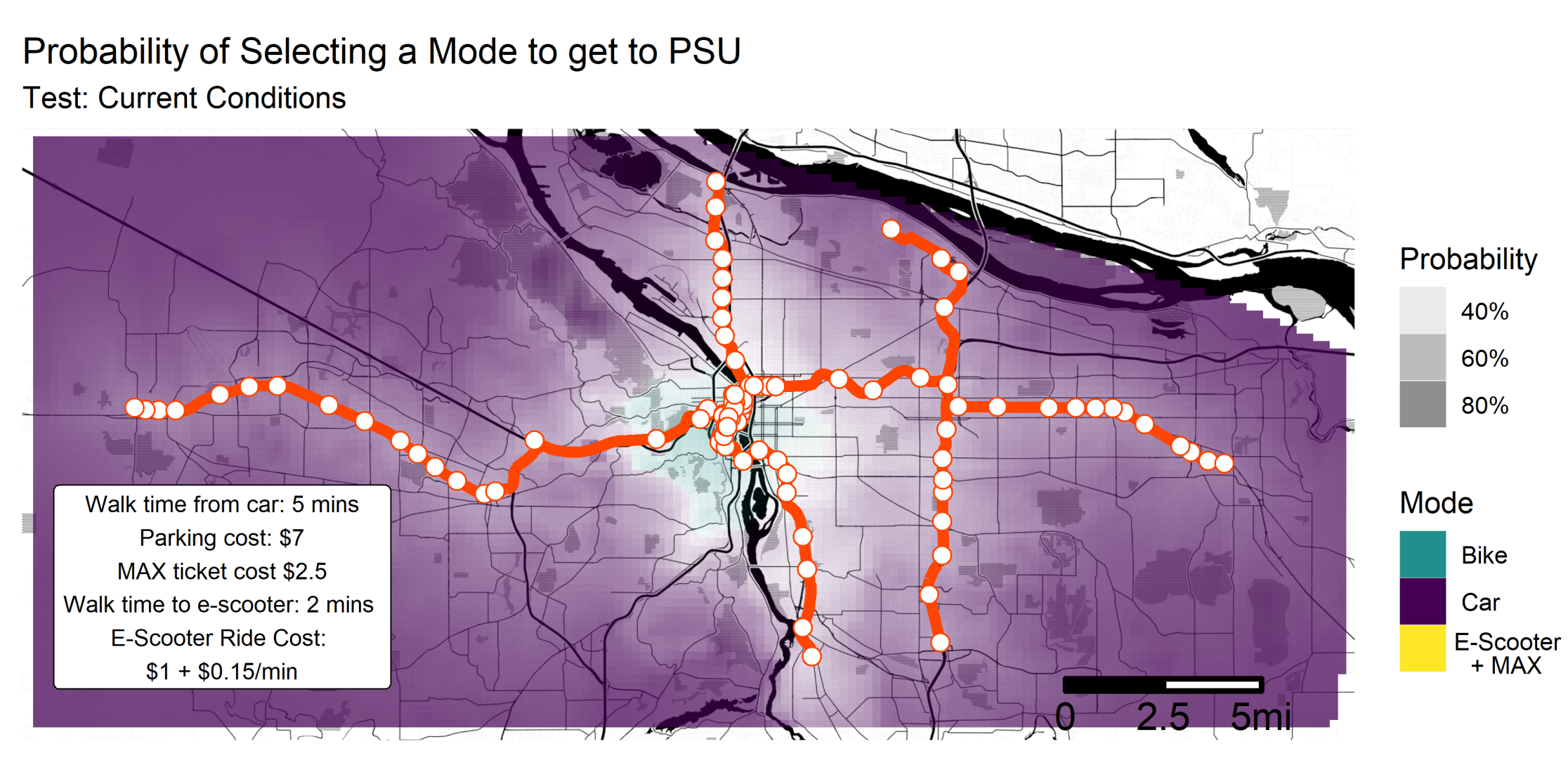 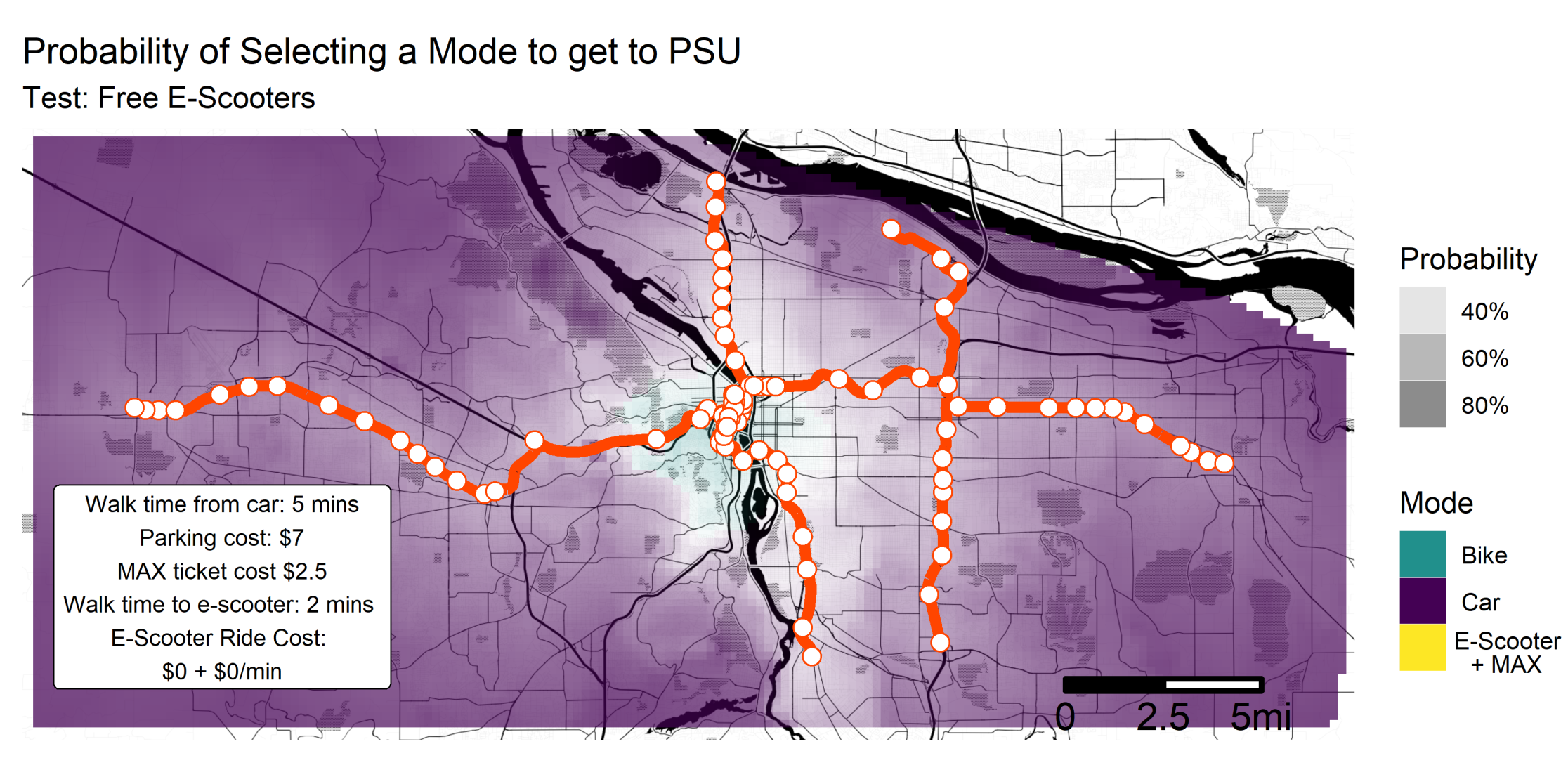 Combining several interventions (in this example: increased parking cost, free e-scooter rides, and PR for MAX and e-scooters) could have the desired effect of encouraging more students to choose e-scooter + light rail transit to get to campus. Note this approach results in e-scooter + MAX being the preferred choice in a large area (lots of yellow): 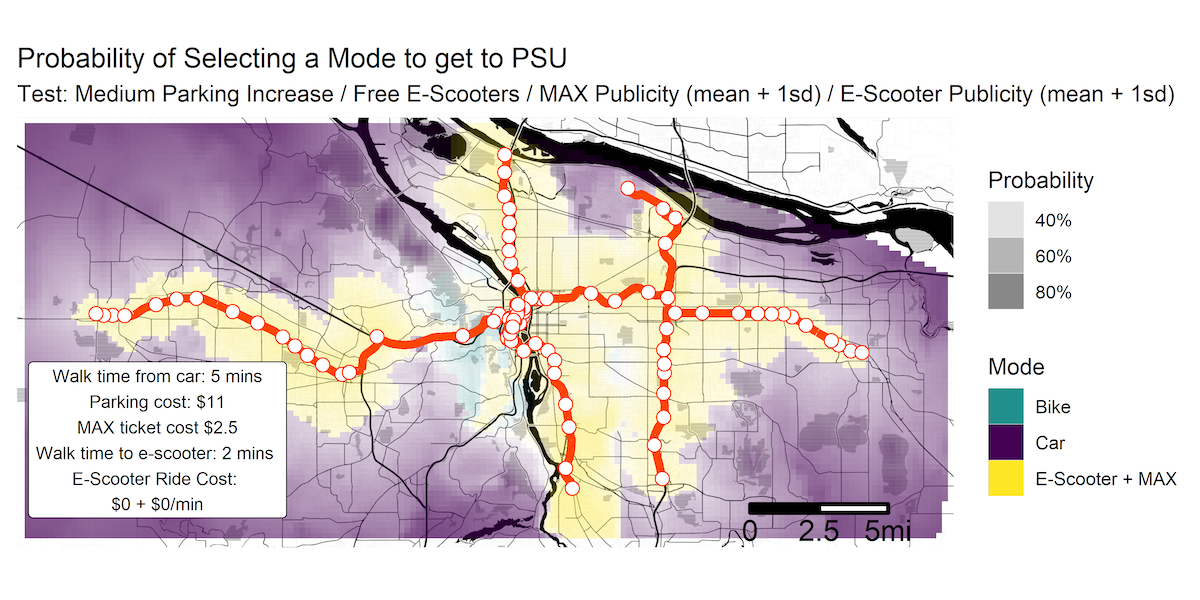 At the time of the survey (the week of Mar 2, 2020), only 6% of the nearly 2,000 respondents had taken at least one e-scooter ride in the previous 7 days. They were asked about barriers that prevented them from riding e-scooters more frequently:

A significantly larger portion of women than men cited e-scooter inexperience, discomfort riding in traffic, and bad weather as barriers. The model did not reveal any significant difference among race/ethnicities for citing these barriers.

WHERE DO WE GO FROM HERE?

The results of this research can offer the following general guidance for practitioners:

MORE ABOUT THE RESEARCHER

Michael McQueen graduated from PSU in summer 2020 with a masters of civil and environmental engineering degree. During the course of his masters program he has been selected as a YPT Streetlight Fellow, a two-time Eisenhower Fellow, and a National Institute for Transportation and Communities (NITC) Scholar. He has served as a graduate research assistant on several TREC research projects, including a set of white papers about e-bike potential, an exploration of e-bike travel behavior, a project on "Vehicle Miles Traveled (VMT) Methodology of Benchmarking Transportation System Performance" for the City of Portland, and a study on trip generation at multifamily housing.

Mike was instrumental in the development of an innovative electric vehicle cost and impact tool, launched in June 2020. He was lead author on the October 2020 paper "The E-Bike Potential: Estimating regional e-bike impacts on greenhouse gas emissions," published in Transportation Research Part D: Transport and Environment. He also contributed to "Transportation Transformation: Is Micromobility Making a Macro Impact on Sustainability?", a literature review led by PSU's Kelly Clifton that has just been accepted to the Journal of Planning Literature. To hear directly from Mike about his research on how e-bike incentives could expand the market, watch a video interview with him, recorded during the 2019 Transportation & Communities Summit.

To learn more about this and other TREC research, sign up for our monthly research newsletter.